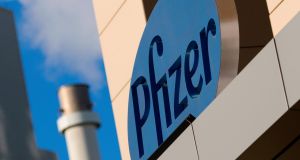 Pharma giant Pfizer has announced a €300 million investment in Ireland which will see jobs added at three of its plants here. Photograph: Dominick Reuter/AFP via Getty Images

Pharma giant Pfizer has announced a €300 million investment in Ireland which will see jobs added at three of its plants.

The company said it would be upgrading or expanding its Grange Castle, Newbridge and Ringaskiddy manufacturing sites. The investments will see around 300 jobs created over the next three years, bringing Pfizer employment in Ireland above 4,000.

Paul Duffy, vice-president of Pfizer for global supply, said the investments would see some facilities upgraded and enhanced, manufacturing and laboratory capacity increased, “and the addition of new technologies to ensure Pfizer is ready to support the next wave of medical innovations coming through our development pipeline”.

The investment in Ringaskiddy marks an important upgrade for one of the group’s older bulk ingredient plants. The Cork site will now have a small-scale early-stage manufacturing facility, developing medicines for clinical trials.

“This is a very important development,” Mr Duffy said, “as it expands Pfizer’s role in Ireland from the manufacture of already approved medicines into the support of an earlier phase of new medicine development.”

He said the Cork development would further strengthen Pfizer’s research and development capability in Ireland. It already has a team at its Grange Castle site in west Dublin working on early-stage molecule discovery.

Ringaskiddy was the US drug giant’s first investment in Ireland back in 1969, initially employing 16 people. The company says that it has since put $8 billion into its Irish operations, including this latest investment.

The announcement is not related to Pfizer’s ongoing development of a Covid-19 vaccine, although its Grange Castle operation is working on quality testing batches of the vaccine candidate that are being manufactured at the group’s plant in Belgium.

Pfizer is among a number of companies looking to develop a vaccine for Covid-19. Working with German company BioNTech, it hopes it will be able to announce a working vaccine as early as November. That would put it ahead of rivals in the process.

It has already chosen three plants in the US, as well as its Belgian site for manufacture of the vaccine and, as with other leading candidates, has started manufacturing ahead of hoped for regulatory approval over the next few months.

“I would expect to see availability of the vaccine during 2021. 2020 will be very minimal circulation, but 2021 we should start to see it come through,” he said.

He confirmed the company’s plan to seek “emergency use authorisation” in the United States as early as the third week of this month. Pfizer is also engaged in a “rolling review” of the vaccine with the European regulator, the European medicines Agency, it was announced last Friday.

“ Discussions are ongoing with the European Commission to provide the vaccine to EU governments,” he said.

Speaking at the Pfizer announcement, Taoiseach Micheál Martin said the announcement was “a further vote of confidence in the skills and talent of Irish people and provides a very welcome boost to the economy”.

“Pfizer has made a significant contribution to the Irish economy and this latest investment is a testament to the quality and experience of the workforce here.”

The upgrades and expansions signal Pfizer’s commitment to Ireland at a time when it is particularly bullish about its pipeline, which, Mr Duffy said, has about 80 products under development, include next-generation gene therapies.

Pfizer has been one of the largest foreign direct investors in Ireland. It currently employs around 3,700 people at six operations around the State. Aside from Grange Castle, Newbridge and Ringaskiddy, these include another Cork manufacturing plant at Little Island, and two administration and financial operations in Dublin.

The Little Island plant, which is part of Pfizer’s Upjohn generic drugs business will be moving to new ownership at the end of next week, merging with Mylan.