Multi-talented Bangor woman up for a challenge 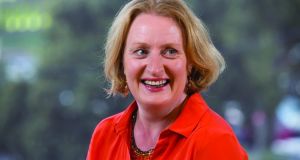 From becoming the first Irish woman to swim the English Channel to taking over as the head of New Zealand’s largest aged-care home-provider, Gráinne Moss has always been ready to swim against the tide.

While most of her working life has been in healthcare, she hasn’t been afraid to change track to further her career.

For example, she once ended up working in a somewhat hostile environment in Tokoroa on the country’s north island for one of Australasia’s leading forestry companies.

As managing director of Bupa Care Services in New Zealand, Moss, from Bangor, Co Down, is responsible for about 25,000 people in 60 care homes, 30 retirement villages and seven rehabilitation sites across the country.

Based in Auckland, where she has lived for a number of years with her husband and four children, Gráinne believes the lessons she learned in the build-up to her successful channel swim at the age of 17 have helped in terms of her career.

“I’m not sure I realised how influential swimming the channel would be over my life, but it taught me so many critical things, such as the need to be resilient, committed and disciplined and to focus on the long game,” she said.

“The swim made me willing to take on things even when there’s a high risk of failing and to continue with them during tough times knowing that at any moment things might turn in your favour,” Moss added.

“Doing the swim left me with a lot of confidence and the feeling I have is that, if things ever go badly wrong and I was to lose my job, I’d still be the first Irish woman to have swum the channel . . . They can’t take that away from me,” she said.

Moss completed the channel crossing in 1987 and continued to swim at international level for 14 years, even opting to swim the Cook Straits between New Zealand’s north and south islands at the age of 31, another first for an Irish woman. Swimming is less central to her life now that she’s running such a big company, but it remains important.

“I still swim, albeit badly, but with four children and a busy career, I think I’m doing really well if I get down to the pool a couple of times a week,” she said.

While focusing on swimming during her late teens and into her 20s, Moss was no slouch when it came to work. After school she moved to Liverpool to attend university, where she studied biology.

During this period she paid her first visit to New Zealand as part of the training scheme, and fell in love with Auckland. Returning to the UK, Moss took a consultancy job with PwC’s health and social services division in London.

“My husband and I both loved London and the jobs we were doing, but I really wanted to get back to doing more hands-on work. We started looking for work locally, but then thought why not go further afield? We had no kids or mortgage so it seemed a good time to go on an adventure, and out of a number of options we ended up over in New Zealand,” she said.

Having made the move and secured work quickly, Moss found herself in demand with a number of headhunters, suggesting her skills meant she could work in other sectors.

“People are really interested in your transferable skills here in a way that I had not seen elsewhere. What everyone told me was that having managed people and big budgets previously, I knew the hard stuff and could pick up the rest as I went on.”

Encouraged by this, she left health for a while to broaden her commercial skills, opting for a job with Carter Holt Harvey, New Zealand’s second- largest publicly listed company, with interests in wood products, pulp, paper and packaging.

Having survived, Moss switched track again and moved to Switzerland to bolster her career skills by undertaking an MBA at the International Institute for Management Development business school. Finding herself pregnant after finishing her study, she opted to return to Auckland.

“I realised I wanted to go back to New Zealand without a job, but confident that everything would work out. I landed a job as general manager of care homes with Bupa in September 2007 and have progressed ever since. I love working here and feel privileged to be with a company that has such a big impact,” she said.