Ireland’s Malin seeks up to €325m in biotech IPO 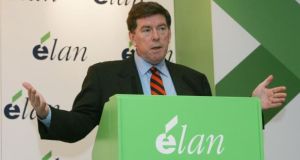 Former Elan chief executive Kelly Martin (pictured) and chairman Bob Ingram, who sold the Irish stock market stalwart to Perrigo for $8.6 billion in 2013, will sit on the board of Malin

Malin, an Irish company set up by a number of former Elan executives to invest in privately held life science assets, said it plans to raise between €275 million and €325 million in one of Europe’s biggest biotechnology IPOs.

Former Elan chief executive Kelly Martin and chairman Bob Ingram, who sold the Irish stock market stalwart to Perrigo for $8.6 billion in 2013, will sit on the board of the new company formed out of private firm Brandon Point Industries.

Malin said it will invest in companies for whom an initial public offering (IPO) or trade sale is premature and provide the long term capital and industry experience it says venture capital and private equity funds cannot guarantee.

It said it has seven such firms lined up, from a US disinfection technology to a Pan-African distributor, with the IPO set to top the £200 million Circassia raised a year ago in the biggest London market biotech debut in years.

A substantial portion of the funds have already been committed, the company said in a pre-admission notice on Friday.

“Our strong belief is that this journey is best served by one type of money and that’s long term money,” Malin chief executive Adrian Howd, a former equity analyst at Berenberg Bank, told Reuters in a telephone interview.

“Over the years, all of us have seen too many times where the science has been fantastic but the commercial impact has underwhelmed because scientists are not best placed to judge the best time to monetise.”

The European biotech sector has been slow to catch up with its US peers, which have seen a renaissance in the past two years, but Circassia’s debut is seen as a bellwether that could unlock listings.

Malin’s approach mirrors Elan’s attempt to reshape itself by seeking to buy a number of companies before being entangled in a bitter takeover battle.

Malin, whose chairman is ex-Elan council John Given and for whom former Elan director and one-time US Food and Drug Administration (FDA) commissioner Andrew von Eschbach will sit on its advisory board, will spend €100 million on its first seven assets, the Dublin-based company said.

A further €120 million euros will be allocated as funds are required with the rest used to build out the pipeline to 10 or 12 assets. Malin will be involved at management level in each company with the likes of Mr Ingram, a former top executive at GlaxoSmithKline, joining as directors, it added.

Malin will also encourage the firms to move to Ireland where the pro-business tax environment has attracted most of the world’s largest pharma companies, including Pfizer and GlaxoSmithKline .

One of the companies Malin acquired a share in, US based Viamet, pulled a potential $75 million IPO last year.

“There are some assets in there that you could see IPOing in the relative short term, others we want to build out. There’s a good blend,” Mr Howd said.