Women in Barclays International unit make half of what men earn 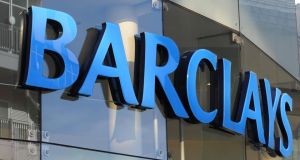 Barclays: in June 2017 women made up 47 per cent of all staff but only 15 per cent of managing directors. Photograph: Joe Giddens/PA Wire

Women working in the investment-banking arm of Barclays are paid on average only half what their male colleagues are paid, according to figures published by the British bank on Thursday.

Barclays is the first big UK lender to publish its gender-pay-gap data since the UK government passed a law forcing all companies with more than 250 staff to do so by April.

The 48 per cent gap between the mean hourly pay of men and women in its Barclays International unit, which includes its corporate and investment bank, underlines how the upper echelons of City trading rooms remain male-dominated.

In June 2017 women made up 47 per cent of all staff at Barclays but only 15 per cent of its managing directors, the most senior grade below executive-committee level, which was up from 14 per cent a year earlier.

The bank said it was “confident that men and women across our organisation are paid equally for doing the same job”.

Jes Staley, its chief executive, told reporters: “We are very focused on diversity and that includes gender. Obviously we would like to get the gap down.”

Citigroup, the US bank, last month said it had a gender pay gap of only 1 per cent among its employees in the US, UK and Germany – but that adjusted for factors including job function, level and geography.

Barclays’s gender pay gap was less pronounced in its UK division, which includes its main high-street bank, and its services unit, where women earned on average 26 per cent less per hour than their male colleagues.

Clydesdale and Yorkshire Banking Group said in December it would boost the pay of 800 employees by lifting its minimum salary to £17,000, or about €19,250, to reduce the gap between what it pays men and women.

The “challenger” bank included a section on its gender pay gap in its annual report for the first time on Tuesday, revealing that its male staff were on average paid 37 per cent more per hour than their women colleagues – well above the national average. – © The Financial Times Ltd 2018