Top 1000: Family offices – private wealth management advisory firms – manage billions for some of Ireland’s most affluent people but few know of their existence 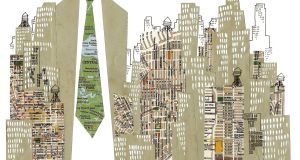 Family offices commonly recruit clients through word of mouth and, although intentions to bring wealth management to everyone are popular in the industry at the moment, these firms rarely trouble people with less than €20 million to spare.

Family offices commonly recruit clients through word of mouth and, although intentions to bring wealth management to everyone are popular in the industry at the moment, these firms rarely trouble people with less than €20 million to spare. The reality is that money makes more money. Who are these people, how do they work, who do they work for, will their product soon become available to the masses, and are they investing in bitcoin?

Alan Merriman is the founder of Elkstone Partners. A former partner with PwC, Merriman also worked with EBS as a finance director. While Elkstone is focused on high net worth individuals and entrepreneurs and guards the privacy of its client base, known clients include Elle Macpherson, Nicole Junkermann, Michael O’Flynn and Jam Jar, the investment vehicle of the Innocent smoothie founders. For Merriman, wealth management is for everybody. While it’s not there yet, his firm, founded in 2011, is keen on “democratising” money management for everyone, from employees on average salaries to the very wealthy.

For now, however, Elkstone’s focus “is on entrepreneurs and obviously very high net worth individuals. What we do for them is basically everything you would expect of a right hand person, 24/7,” Merriman says.

Wealth management for Merriman is an extension of financial security. It’s “looking after what you have and growing it sensibly,” something many people, including very successful people, struggle with.

While Elkstone doesn’t specify a minimum amount of money their clients must have, there is a certain profile of person they cater for best. The perfect fit for their firm are those in the €20 million to €200 million space, but they also have a number of billionaires on their books. “Every client is different, they have different liquidity, different goals, different pockets, they have different requirements,” Merriman explains.

Investment strategies are tailored to each client’s needs. “There isn’t an Elkstone fund that every client is a participant in. What we do is we work with each client in a different way,” says Merriman.

“A lot of our clients are very sophisticated; they’ve come from capital markets so we’re dealing with clever people who know what they’re doing.”

For those people, Merriman says they help research how to allocate their money. But they also present ideas and potential deal propositions.

Merriman is absolutely clear where clients and non-clients alike can find the next opportunity: “everywhere, absolutely everywhere.” Merriman’s belief is that for people who have money, there’s always an opportunity to put it to work. “Money does make money, that’s the reality,” he says.

The benefit of wealth management, from his point of view, is that there are no boundaries. Opportunities can present themselves in the start-up world, inalternative funds and even in crypto currency. Merriman believes that if, afterlooking extensively, an opportunity is “compelling”, then they’ll try and makeit happen.

“If it’s a private equity deal like a restaurant or something, we can say, ‘that’s interesting, clients three, five and ten, I could see them liking that. Let’s bring it to those three clients’.” If they’re interested, Merriman will set out to make the opportunity a reality. Offering this service to a global clientele means a hectic schedule. “It changes by the hour. I’m in Dublin today, I’m in Germany on Wednesday, I’m in London on Thursday, I’m back here on Friday, I’m going to Texas on Saturday. From Texas I’m going to New York, then I’m back here for a week and then I’m off to Miami. That’s continuous, that’s not an exaggeration,” Merriman says.

But it’s not just about looking after the millionaires; Merriman also has tips for the average person, noting that people don’t actually create enough space to look after their financial health. “A bit like going to the gym [and ] looking after your health, finding a bit of space to properly look after your financial affairs is very important.” Given that most people are not Warren Buffet, they don’t have the time to be doing the research and so forth”, Merriman advises that people need to make sure they’re diversified. “That’s very important,” he says.

The bulk of what we do now is financial assets. Our typical portfolio would have equities, bonds, real estate assets and currencies,

Crowe is the founder and chief executive, Kestrel Capital. He joined Merrill Lynch in 2000 to set up and develop the bank’s Irish wealth management business.

For Crowe, wealth management is about helping people, usually of the high net worth variety, “to achieve whatever their financial goals are with whatever wealth they’ve created”.

Typically, these will be people who have sold a business, or held senior roles in business, and subsequently cashed out. Additionally, Kestrel clients include professionals who’ve accumulated wealth in their profession. “We have clients who have wealth of several million, up to hundreds of millions,” he says.

For Kestrel, the client list revolves around those in the €3 m illion– €5 million wealth bracket. Of course, no bracket accurately represents an entire portfolio. “We’ve clients who have less than that and we’ve clients with substantially more,” Crowe says.

When it comes to managing the money, Crowe explains that “a wealth manager is in the business of asset protection”.

“The bulk of what we do now is financial assets. Our typical portfolio would have equities, bonds, real estate assets and currencies,” he adds.

What can differentiate multi-family offices from other private client advisers is the different investment opportunities they are shown from time to time. “Some clients will have an interest in investing in private equity and others won’t,” Crowe says. Lest you begin to mistake multi-family offices for a hedge fund, Crowe is clear that they don’t go out and invest in private companies – so you won’t see them operating a chain of restaurants on behalf of clients in the near future.

He’s a fan of diversification. “At the end of the day, if you want to hold on to your wealth, the easiest way is to diversify your investments. The more spread you have the more likely you are to hold on to it,” says Crowe.

Of course, for some people, keeping wealth won’t simply be enough and the drive will be to create wealth. “The problem with investing, and we’re all guilty of this, is that we need instant gratification.”

But creating wealth brings its own risks. “If clients want to create wealth they concentrate their risk on something they’re comfortable with ... Our advice to people is; ‘can you work out your tolerance of loss’ – and we mean a permanent loss of capital.”

How all of this works for each individual is very different, as Crowe explains. “It’s a pretty tailored strategy for each client. Different families have different needs. When it comes to money, people may have different attitudes to things,” he says.

“If you’re in the wealth protection business, you’re looking for solid companies and solid investment. There are plenty of fabulous companies out there in the small and mid-cap range that we own in our portfolio because they are good companies that deserve to be invested in.”

I’m in London every three weeks, New York maybe twice a year and Singapore once

David Hall is the chief investment officer of a single family office for a private wealthy family. Before working for this family he worked as an investment adviser for Morgan Stanley Private Wealth Management where he advised private UKand Irish clients.

His company is currently invested in opportunities in private credit, venture capital and music royalties.

Single family offices cannot accept outside capital; they work solely for the family or individual in question. That, Hall says, requires a person to have at least €100 million – otherwise the costs associated with running a single family office don’t stack up. Like all wealth managers, Hall sings the praises of portfolio diversification. His office focuses purely on alternative investments including private equity deals and hedge funds. The diversity in his company’s portfolio is significant.

“Strategies include private credit, venture capital, music royalties, farmland,” Hall says. Some venture capital investments on his books at the moment include one in Newswhip, a Dublin-based social media monitoring company.

Hall targets around eight per cent growth in capital on an annualised basis, something that is “completely tailored” to the family in question and their requirements.

“It’s a complete open box,” he says, noting that if a family wants to make higher returns they can, but they’ll have to take much higher risk. The day-to-day for Hall involves trying to source new opportunities, performing due diligence on new funds and monitoring investments. “I’m in London every three weeks, New York maybe twice a year and Singapore once,” Hall says.

Having started his career in Morgan Stanley in private wealth, Hall was exposed to a number of high net worth individuals, including the principal of the family office for whom he now runs investments. The portfolio has performed as he expected, and the benefits from his perspective as a portfolio manager include the fact that there are no liquidity constraints.

Dismissed by some as a risky gamble, or a bubble that’s bound to burst; adored by others who claim the upside is endless, and that crypto currencies will one day sit alongside the other fiat currencies. But what do wealth managers think about bitcoin?

Kestrel Capital’s John Crowe says his firm hasn’t yet invested.“We haven’t invested in bitcoin. We see it as very speculative,” he says.

Alan Merriman of Elkstone Capital is more ambivalent. “If we decided that bitcoin was a great place to be, we would come up with our thinking on it, the rationale behind it and how you might play it and we’d share that with all our clients. Some clients would embrace it straight away and other clients would not touch it with a ten-foot barge pole,” he says.

1 Ufurnish: ‘It’s like Skyscanner, but for furniture’
2 Virgin Media vows to withhold sports channels until Eir ‘pays its bill’
3 Avoca warns of redundancies due to coronavirus
4 Errant texts highlight weaknesses in banks’ digital shift
5 Coronavirus spreads to sandwich king
6 McGann stepping down at troubled Aryzta
7 Coronavirus: We must save lives but we also need to live
8 What will the office market look like after the great remote working experiment?
9 Ronan gets permission for extra floor in Tara Street development
10 How much does it cost to sell your house?
Real news has value SUBSCRIBE