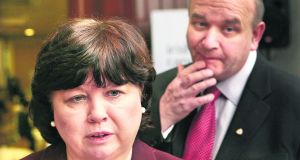 Former Tánaiste Mary Harney said she was looking forward to serving on the public-interest committee of KPMG.

Former tánaiste Mary Harney has been appointed by accounting firm KPMG to its public-interest committee.

This body oversees aspects of KPMG’s “decision-making” and supports the “quality-control structure” at the Big Four accounting firm here.

Ms Harney spent 34 years in politics following her appointment to the Seanad in 1977. She became a TD four years later and would subsequently serve as minister for health, minister for enterprise, trade and employment, and minister for environmental protection.

She served as tánaiste from 1997 to 2006, in her role as leader of the Progressive Democrats who were in coalition with Fianna Fáil. She retired from politics in 2011.

As well as being chancellor of the University of Limerick, Ms Harney sits on the boards of a number of companies, including Brindley Healthcare and Euro Insurances here, and Biocon, Asia’s largest biopharmaceutical plc with its headquarters in India.

Commenting on Ms Harney’s appointment, KPMG’s managing partner Séamus Hand said: “Mary brings a broad range of experience and a fresh, external perspective to good stewardship and the management of reputational risk, which is fundamental to the continued trust shown in us by our various stakeholders.”

Ms Harney said: “At a time of heightened focus on governance and trust, I’m looking forward to serving on the public-interest committee of KPMG . . . in its role of safeguarding public interest and to contributing to maintaining the firm’s reputation.”