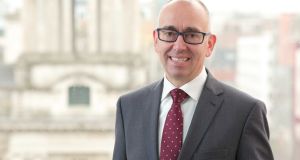 Kevin Kingston, Danske Bank UK CEO: “Demand for corporate and business lending overall was subdued as a result of uncertainty around the prolonged Brexit process.

Pre-tax profits at Danske Bank in Northern Ireland rose slightly last year to £90 million (€106 million)), according to its 2019 results..

But the bank, which is one of the North’s largest financial institutions with 40 branches, also reported a dip in total income which fell to £233.2 million, compared to £235.1 million in 2018..

Danske said its income had been “broadly maintained” over a 12 month period that had been largely dominated by “continued economic and political uncertainty”.

The latest set of results show the bank’s overall lending levels grew by 3 per cent year on year in 2019 but that new lending to businesses was hit by Brexit as some customers delayed investment decisions.

“Demand for corporate and business lending overall was subdued as a result of uncertainty around the prolonged Brexit process.,” Kevin Kingston, Danske Bank UK CEO, said on Wednesday.

“Current demand levels are below what we would expect in a more normalised trading environment.”

He said the bank’s capacity to lend to businesses “remained strong”.

Danske had a loan to deposit ratio of 73 per cent at December 2019.

According to Mr Kingston one of the highlights for the Copenhagen headquartered bank, which employs 1,400 people in the North, during 2019 was the growth in its mortgage business.

Mr Kingston said: “Mortgages were the key driver of the bank’s overall lending in 2019.

“Danske Bank’s total mortgage lending is at its highest ever level, and it is noteworthy that in the past 12 months we have helped over 2,000 local first time buyers realise their home owning ambitions.”

Danske also grew its customer deposits by 7 per cent year on year during 2019.

Mr Kingston said he expects the bank to play a “crucial” role in the North’s economy as the UK continues its negotiations on the Brexit front.

“There will be continuing challenges to economic growth in 2020, and Northern Ireland in particular will need to adapt to new Brexit realities quickly,” he warned.

He used the publication of Danske’s full year results as an opportunity to personally congratulate the North’s political parties on the restoration of the Stormont government.

“A rejuvenated and focused Northern Ireland Executive and Assembly is of paramount importance,”Mr Kingston said.

1 Knock gets visit from world’s largest passenger plane
2 A maverick taking on the Irish whiskey establishment
3 Why Sweden ditched its negative rate experiment
4 Will Avolon find itself on the block as China prepares to seize troubled parent HNA?
5 Review: prepare to flip over Samsung’s new folding phone
6 Dr Pepper owner in talks to take over former Lidl distribution centre
7 How do you know if you are wealthy? It’s not straightforward
8 Kingspan amasses €750m war chest to fund acquisitions
9 Nothing beats practice in bid to master public speaking
10 Store manager unfairly dismissed for hugging staff members awarded €15,000
Real news has value SUBSCRIBE