Wild Geese: Thriving in Canada’s ‘can do’ working atmosphere

Engineer has no regrets at leaving Ireland and UK behind 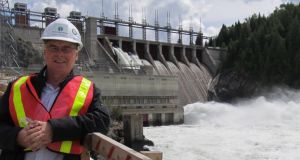 Robin Fitzgerald: ’You only live once, so you might as well make it interesting.’

Thirty years ago, the prospect of becoming stuck in a rut in Ireland pushed newlyweds Robin and Zinda Fitzgerald towards a new life in Canada. Today, she is a school principal on Vancouver Island and he is principal, water resources, with international engineering and environmental services firm Klohn Crippen Berger.

Fitzgerald graduated in engineering from Trinity College Dublin in 1976 and worked for builders G&T Crampton. By 1981, the couple felt stalled in their careers and the Irish economy was sliding.

A friend who had gone to Canada in 1980 spoke enthusiastically about the opportunities there and the Canadian consulate told Fitzgerald: “You’re an engineer. When you arrive, knock on any door and they’ll hire you.”

The couple moved in 1982 and, after a few weeks of intense job-hunting, Fitzgerald was hired by a contractor on a sewage treatment plant project at Lake Louise in Banff National Park.

Eighteen months later as the Canadian economy began to slide, the contractor went bust, but Fitzgerald was kept on by Parks Canada to help get the job finished.

In 1985, he joined large engineering consultants, Reid Crowther, to work on the 1988 Winter Olympics in Calgary. From there he moved to Yellowknife and was thrown in at the deep end on the design and management of projects across the Arctic. What was to be a summer-long assignment, turned into five-years.

By 1991, the Fitzgeralds had three sons and the family was keen to move south. In 1992, they moved to Vancouver where Fitzgerald managed a government-funded research project to enhance urban drainage software. Later that year, following an approach from Thames Water to apply the software in south London, the family moved to the UK where Fitzgerald opened a Reid Crowther office with a colleague.

“Our time in the UK reminded us of why we left in the first place and we happily returned to Calgary,” Fitzgerald says.

In early 2000, aware that Reid Crowther was about to be sold, Fitzgerald joined Klohn Crippen Berger. “The job was attractive because they operate in completely different sectors [geotechnical, mining, oilsands, large dams, hydroelectric, bridges] to those I had spent my career in up to then.”

With an eye to retirement, the Fitzgeralds bought a waterfront property on Vancouver Island in 2000. In 2005 they relocated there full time and Zinda Fitzgerald, who had been principal of a 700-pupil private school in Calgary, became head teacher of a school near their home in Nanaimo.

Fitzgerald now works from home two days a week and on the other three he commutes to Vancouver city by seaplane.

Fitzgerald says there are significant cultural differences between working in Canada and in Ireland or the UK.

“Before I left Ireland, I was working on the expansion of a Coca-Cola plant near Drogheda. An engineer was sent over from Atlanta to oversee commissioning. At the first monthly project meeting, after listening to a few hours of good-natured Irish-style procrastination – to be resolved over a pint later – he barred the door to stop anyone leaving so we could get some proper business done.

“In England, I found that job titles really mattered. On any given day, we’d have to call ourselves ‘project engineer’ so we could interact with the techies, and ‘senior project manager’ to get the attention of our project management counterparts.

“There were also quite fundamental technical differences between the Canadian and UK modelling methodologies. When discussing this with our British counterparts, their frequent comment was: ‘But this is the way we’ve always done it.’ That’s definitely not something you often hear in North America.”

Robin is convinced that the key attributes that helped them succeed in Canada are as important today. “Good writing and people skills still give the Irish a huge advantage over many other immigrants,” he says. “The sectors I work in have seen strong growth since 2005. We’ve hired a few young Irish engineers who are doing well. The key thing is to show yourself as confident and capable.

“Consulting engineering requires a good mix of technical and people skills. A touch of Blarney goes a long way, but don’t over-do it. Be prepared to move for job assignments as the best way to an engineering job in Canada remains to head west and north.

“We have lived in 13 different houses. In one year alone, 1992, our then eight-year-old son went to school in Yellowknife, Vancouver, Dublin and Reading.”

A final word of advice for would-be wild geese? “You only live once, so you might as well make it interesting.”