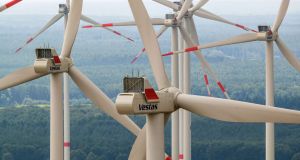 Wind energy: one of the biggest beneficiaries from the rise in the Public Service Obligation. Photograph: EPA/JENS BUETTNER

The Government is facing growing pressure to end a costly system of supports for the renewable energy industry that has drawn criticism from some major employers in the Republic, including Kerry Group and multinationals Microsoft and Intel.

From next October, all homes and businesses in the State will be faced with an increase in their electricity bills when the Commission for Energy Regulation (CER) raises its public service charge by €76 million to €400 million to cover the growing cost of supports for the wind industry.

The extra charge, called the Public Service Obligation (PSO), is levied on all electricity users in the Republic. The cash raised supports wind power, other renewable energy and peat-fired electricity generators. As a result, the €400 million raised will be passed on to companies operating these plants, including State-owned ESB and rivals SSE Airtricity and Viridian.

Government policy supports the development of renewable energy through a number of schemes, which guarantee prices to wind farms and other companies that generate electricity from “green” sources. This is because, under EU directive, the State has to ensure that 16 per cent of all energy needs are met from renewables by 2020. To achieve that, 40 per cent of electricity has to come from these sources. Failure to meet the targets could result in heavy fines.

The charge is underpinned by legislation and the CER renews it every October following a consultation with the industry and those that are going to have to pay it.

Barring 2015, when the PSO dipped, the commission has increased it every year since 2011. Figures show that the levy due to be imposed from next October is more than four times the €92 million collected under the scheme in 2011.

Two things drove this year’s increase. First, the charge is designed to bridge the gap between the actual wholesale cost of electricity and the prices guaranteed to the generators. Thus, as the fall in oil and natural gas prices drove down the wholesale price, the PSO rose.

The second factor is the growth of the renewable sector. Companies generating electricity from “green” sources, the bulk of which are wind farm operators, are always the biggest beneficiaries, thanks to the schemes that underwrite the prices that they are paid for the energy that they produce.

Overall, they will share €277 million of the €400 million total collected from consumers and business over the 12 months from October. This compares with €181 million under the current levy. Of this, the wind industry will receive €269.7 million. According to the commission, this is down to the rate at which the industry grew over the last year.

“An estimated 2,814 mega watts (MW) of renewable generation, mostly wind, will be supported by the PSO next year. This is 694MW, or 33 per cent, more than the 2,120 MW supported in the current PSO period, hence driving up the levy,” the regulator states in a document detailing the increase.

The CER’s figures show that businesses will pay more than €253 million of the €400 million total. Small firms will have €21.18 a month added to their bills from October – 18.5 per cent more than what they pay at the moment. They will each pay a total of €254.16 towards the public service obligation over the 12-month period. Their overall share of the €400 million will come to €42.6 million.

Medium and large-scale electricity users are in for the biggest hit. They will pay a total of €210.95 million between them over the 12-month period. This group includes major employers, including those in key areas for the Republic such as food processing, pharmaceuticals and technology, as well as large public service organisations such as hospitals. Their overall share of the burden will rise by 23.5 per cent.

There is no monthly breakdown of what they will pay as, in their case, the charge is tied to capacity – that is the physical amount of power they are likely to use each month. A number of big companies argue that allocating the charge in this way is unfair.

In a submission to the CER before it arrived at its final decision, tech giant Microsoft, which employs 1,200 people in the Republic, said this penalises large energy users who are holding energy capacity in reserve to meet anticipated growth.

The multinational also points out that the rate at which the PSO has increased over the last five years represents a “rate shock” for large energy users and “puts the Ireland energy market at a disadvantage”. In a similar vein, Irish food and ingredients giant, Kerry, which employs 4,000 people here, warns that the charge will damage its competitiveness.

“Much of our business needs to compete in non-Irish, and in many cases, global markets. These are not costs which will be levied on our non-Irish competitors,” says senior manager Garvan Sweeney. “Many of our international competitors will benefit from a decrease in wholesale electricity costs without a corresponding rise in PSO.”

While the Republic’s electricity costs are perceived to be high, the latest assessment from the National Competitiveness Council says they are slightly below the EU average for both small and large businesses. However, Intel’s director of global utilities and infrastructure, Marty Sedler, argues that the PSO threatens this advantage.

He acknowledges that recent falls in natural gas prices, which have a knock-on impact on electricity, improved the Republic’s competitiveness but warns that the way in which the PSO is implemented negates this.

“The latest proposal is an approximate 36 per cent increase to 2016/17 which is well out of the range of manageability and [is] considered a rate shock,” he says.

Along with the high-profile names, a large number of quarries and cement manufacturers also warn about the impact of another PSO increase. Those businesses need large amounts of electricity. One, Frank Harrington of Harrington Concrete and Quarries in Sligo, points out that his industry has shrunk by 70 per cent over the last number of years, shedding jobs in the process.

“I earnestly encourage the CER to recognise the fact that the high cost of the electricity, and in particular the PSO element, is detrimental to the sustainability and growth of business in a still very fragile environment,” he says.

All submissions are a response to the CER’s original proposal to increase the charge to €440 million. The regulator cut back on this, but businesses still maintain that the actual increase is going too far.

While the levy imposed on consumers looks small, leading charity St Vincent de Paul says that it will hit vulnerable households. The organisation points out that the unintended consequence of the levy is that it increases the burden on low-income customers and those with a history of arrears and debts.

“To this extent, the PSO can be viewed as a regressive tax,” the charity argues. Its submission states that the increase will eat into gains from recent falls in energy prices.

For its part, the wind lobby maintains that it actually cuts electricity prices. The Irish Wind Energy Association says that a recent report, based on figures from the national grid operator, Eirgrid, shows that wind drove down wholesale prices by 26 per cent in the first half of this year. The association argues that this offsets what consumers pay to support the industry under the PSO.

The CER acknowledges all the arguments, but says that the PSO is Government policy, designed to promote renewable generation and indigenous fuels – that is, peat – and to support energy security. It explains that it cannot abolish the charge.

“Furthermore, the CER does not have discretion regarding the magnitude of the PSO levy, as the CER calculates the PSO levy in accordance with the governing legislation,” it says. “Consequently, any issues pertaining to PSO legislation, PSO policy and associated terms and conditions are a matter for Government policy and outside the remit of the CER.”

The Department of Communications, Energy and Natural Resources claims the scheme is one of the cheapest in th EU and is vital to enable the Republic to meet its renewable energy targets. “The Government has no plans to end the PSO in the foreseeable future,” it says.

According to Neil Walker, director of employers’ group, Ibec, the Government is likely to have to get to grips with the issue in coming weeks. One of the schemes supported by the PSO, known as Renewable Energy Feed-in Tariff (REFIT) 2, closed at the end of last year. This means that any green energy projects built after that date will not benefit from the scheme.

As a result, the renewable industry is already lobbying for a replacement. Walker expects that a formal consultation could begin in the autumn.

His organisation fears that its outcome could leave businesses and consumers facing even more dramatic increases in the charge. Walker acknowledges that onshore wind is the most efficient and cheapest form of renewable energy currently available. However, the proliferation of wind turbines around the country has sparked a public backlash.

Walker suggests this may prompt the Government to introduce supports for more expensive technology, with an inevitable impact on the levy. “That could lead to a trebling or quadrupling of the PSO,” he warns.

The department confirms that there will be a consultation, once its staff have completed a detailed economic analysis of proposals for a new support scheme that the Government hopes to introduce next year – assuming it gets state aid clearance from the EU. This could involve either a new feed-in tariff, similar to REFIT, or a grant. Some sources have indicated that officials are also considering an auction-type system, which should in theory favour the cheaper and more efficient suppliers.

“Therefore, consideration of this new policy measure to be funded by a PSO levy is being preceded by robust analysis and a full evaluation of the available technologies, their cost effectiveness, the level of support required and careful consideration of impacts,” the department says.