‘Uncertainties about the outlook have increased in recent months,’ says Jay Powell 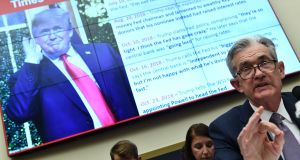 Chairman of the US Federal Reserve Jay Powell has cemented the case for the US central bank to cut interest rates based on mounting risks to the US economic outlook, in dovish testimony to Congress that fuelled expectations for a rate cut this month.

Despite a strong jobs report for the month of June and last month’s new truce in the trade war between the US and China, Mr Powell said “uncertainties about the outlook have increased in recent months”, particularly internationally.

“Economic momentum appears to have slowed in some major foreign economies, and that weakness could affect the US economy. Moreover, a number of government policy issues have yet to be resolved, including trade developments, the federal debt ceiling and Brexit. And there is a risk that weak inflation will be even more persistent than we currently anticipate,” said Mr Powell.

The Fed chief’s statements to Congress were delivered as investors are betting that the reserve’s monetary policymakers will move as early as late July to cut its main interest rate by at least 25 basis points from its current level of 2.25-2.5 per cent.

Mr Powell did not commit to any time frame for possible monetary easing, nor did he point to the scale of the interest rate cuts that would be required to protect the US economy from growing risks to the expansion. But he repeatedly said the Fed was committed to preventing a slowdown in the US economic expansion.

The S&P 500 index jumped as much as 0.8 per cent to 3,002.98, crossing the 3,000 threshold for the first time, before easing back to be 0.4 per cent higher by mid-morning in New York. The Nasdaq Composite and Dow Jones Industrial Average also touched new records.

US sovereign debt yields and the dollar pulled back immediately on the release of the testimony.

The Fed’s move towards looser monetary policy – potentially reversing the tightening cycle that Mr Powell oversaw in 2018 – comes as the central bank is under heavy pressure from US president Donald Trump, who has been openly pushing the US central bank to cut rates, drawing criticism that he is seeking to undermine the central bank’s independence. But the Fed has insisted that it is fiercely protective of its autonomy.

Mr Powell said he had no intention of stepping down from the Fed, even if Mr Trump sought to fire him. “The law gives me a four-year term and I fully expect to serve it,” he said.

The Fed’s consideration of interest rate cuts at a time of exceedingly low unemployment is being described by many economists as an “insurance” policy against a slowdown rather than a reaction to sharply worsening data, so it may only result in one or two cuts rather than a more protracted easing cycle.

One of the risks for the Fed in cutting rates now is that it could leave it less room to stimulate the economy once a new recession does come sometime in the future. But Mr Powell said he did not expect a “severe downturn” in the US economy and insisted that the Fed’s tools would be “adequate” to tackle any future crisis.

“Libra raises many serious concerns regarding privacy, money laundering, consumer protection and financial stability,” he said during testimony before the US House of Representatives financial services committee. “These are concerns that should be thoroughly and publicly addressed before proceeding.” – Copyright The Financial Times Limited 2019

1 Over 400 complaints from migrant workers at meat plants lodged with WRC
2 The Irish Times Deal of the Year: The three finalists
3 Avoca warns of redundancies due to coronavirus
4 Staff at Dublin and Cork airports to vote on work practice changes
5 Moving in and out of lockdown is a recipe for economic disaster
6 Coronavirus spreads to sandwich king
7 McGann stepping down at troubled Aryzta
8 Lenders to baggage-handler Swissport offer rescue deal
9 Ulster Bank tells customers in error they cannot extend payment breaks
10 The Irish Times Company of the Year: the three finalists
Real news has value SUBSCRIBE