Sigmar Gabriel calls on Juncker Commission to prioritise the issue 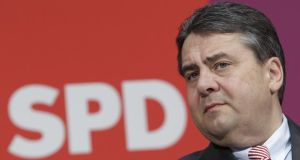 In the wake of the Luxembourg Leaks, finance minister Wolfgang Schäuble told the Bundestag that the era of corporate “non-taxation” is drawing to a close. Separately, Dr Schäuble announced a €10 billion investment package.

Mr Gabriel, leader of the Social Democratic Party (SPD), said the “phantom” of tax avoidance must be exorcised “as soon as possible”.

He called on the new European Commission, headed by Luxembourg’s ex-premier Jean-Claude Juncker, to prioritise the fight against tax avoidance.

“If international companies can play EU member states against each other, then the European project as a whole is called into question,” said Mr Gabriel to the Süddeutsche Zeitung daily.

Dr Schäuble said Luxembourg had signed a Berlin deal last week to end tax evasion through exchange of bank data, but that “the next step would be the use of legal measures”.

“Companies that operate internationally should make their fair contribution to public finances like other companies,” said Dr Schäuble.

He welcomed the end of the “Double Irish” arrangement as an “important step”, adding: “It’s not on when a few enrich themselves at the cost of the majority, that’s something that applies to states as well as companies - small and large.”

Luxembourg and its former premier came under attack from all sides in the Bundestag today. SPD finance expert Carsten Schneider called on the EU commission president to explain what he knew about tax avoidance agreements in Luxembourg, and when.

Green Party floor co-leader Katrin Göring-Eckardt said that, given his political biography, Mr Juncker was “not particularly credible as the lead fighter against tax avoidance”.

Meanwhile Dr Schäuble surprised onlookers today by announcing a €10 billion spending programme today to give a shot in the arm to the slowing German economy.

From 2016 to 2018 respectively, the Christian Democrat (CDU) politician will spend an additional €3.3 billion annually. The additional spending would “boost growth in Germany and Europe”, he said, without endangering his ambition for German finances to enter the black next year.

“You can take it that we will still balance the federal budget from 2015 without new debt,” he said. “Our citizens can depend on that, and not just for next year.”

The finance minister said he would spend the additional money in education, construction and infrastructure investment. He said the money would be freed up by strict spending discipline of federal finances.

Leading economists have criticised Germany on its public investment restraint which, at 18.4 per cent of GDP, is below the EU average of 19.2 per cent. A study by Berlin’s DIW economic think tank suggests a €1 trillion backlog has built up in Germany since 2000.