Planet Business: Welcome to the longest of long-haul flights 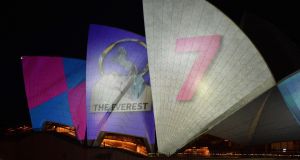 Number of would-be space tourists who have paid to take a trip on Richard Branson’s Virgin Galactic since the company’s inception 14 years ago. Branson now says the company should be in space “in weeks, not months”.

Price of a (return) ticket in this still notional universe where Branson can run a commercial space travel business.

Number of years that have passed since Virgin Galactic first predicted it could help people see the orbital sunrise of their dreams, then get them safely back to earth.

Image of the week: Opera backlash

It is one of the 20th century’s most famous landmarks, but not even the architectural wonder that is the Sydney Opera House can escape commercialisation. When sporting body Racing NSW said it would be illuminating its famous “sails” with an advertisement for its Everest Cup horse race, protestors were ready for it, shining torches and booing as the lighting display began. With shades of magazine FHM’s decision to project an image of model and presenter Gail Porter on the side of London’s Houses of Parliament in 1999, Racing NSW wanted to get its event “on the world stage” and said it wasn’t expecting such a fierce backlash. Let’s just hope Australians are still okay with their architectural jewel being all lit up in green for St Patrick’s Day.

Project Sunrise is Qantas’s name for its challenge to manufacturers Boeing and Airbus to deliver an aircraft capable of flying non-stop from Sydney to the likes of London, New York, Cape Town, Rio de Janeiro and Paris. So far the longest flight Qantas can manage without a need to refuel is from London to Perth in Western Australia, a route it only started doing earlier this year. Now, under Irish chief executive Alan Joyce, Qantas has ambitions to find “the antidote to the tyranny of distance”, shrinking the earth and ushering in an era of less painful long-haul travel. Making that jump from 17 hours to 21 hours is, he says, “the last frontier in global aviation”. London-Perth is eclipsed in distance only by Qatar Airways’ Doha-Auckland route and, from this week, Singapore Airlines’ Singapore-Newark service, a 16,700km effort. It’s not the trip for your inflight entertainment to go haywire on.

Getting to know: William Nordhaus and Paul Romer

William Nordhaus and Paul Romer are the winners of this year’s Nobel prize for economics, which, for the sake of pedantry, it must be clarified is not one of the original Nobel prizes that date back to 1901, but the Sveriges Riksbank Prize created “in memory of Alfred Nobel” in 1969. Nordhaus and Romer are US economists whose research has focused on how the unintended side effects of economic activity may affect growth in the long term. Nordhaus is a fan of carbon taxes, while Romer is more of an innovation subsidies kind of guy. People often think protecting the environment will be so costly and hard, they would prefer to just ignore it, says Romer. But it’s not an either-or situation: “We can absolutely make substantial progress protecting the environment and do it without giving up the chance to sustain growth,” he says. Now might be a good time to start.

New vulnerabilities have emerged in the global financial system, the International Monetary Fund (IMF) took the time to warn this week. The bad news is that the resilience of the system to absorb shocks is untested since the last big crisis. So what exactly is it worried about?

1. Trade tensions: When trade skirmishes escalate, there are few winners.

3. Political uncertainty: And to think we almost got through this without mentioning Brexit.

4. Monetary tightening: The dialling back of stimulus measures plus rises in interest rates could prompt market turmoil.

Basic income for all: Has the Covid crisis given us a new economic model? 06:00
Only way is up for Stripe as valuation skyrockets 05:53
RTÉ board should not tune out from digital expertise 28 Nov
Kinzen raises $2.2m as it helps clients fight ‘misinformation’ 28 Nov
Musk’s money, Santa’s immunity and Blinken’s Brexit analogy 28 Nov

1 Only way is up for Stripe as valuation skyrockets
2 ‘I don’t need to do any of this. . .I don’t actually need to work.’
3 How long can Government afford to keep State pension age at 66?
4 Basic income for all: Has the Covid crisis given us a new economic model?
5 RTÉ appoints Ann-Marie Power as first group head of arts and culture
6 Oxford-AstraZeneca vaccine may be trialled again to prove results were ‘not a mistake’
7 Dubliners spend 55% of take-home pay on rent
8 Irish companies get to the point at ‘MedTech Idol’
9 Facebook Ireland staff coin it as average pay reaches €154,000
10 Family torn apart by father’s enduring power of attorney
Real news has value SUBSCRIBE