April, May and June winners of awards in association with KPMG 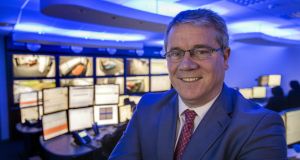 David Walsh, founder and chief executive of Netwatch: merged the group he founded with two US businesses and one UK firm. Photograph: Brenda Fitzsimons

From significant mergers to multimillion-euro asset sales and important deals, the first three winners of this year’s Irish Times Business Person of the Month Awards are among the country’s most accomplished business leaders.

The monthly award, in association with KPMG, was created to mark excellence and outstanding achievement in the field, and is open to business people at home and abroad as well as international executives leading major companies in the Republic.

Here we profile the winners for the first three months.

The first award in April went to Carlow-based Netwatch chief executive David Walsh (54) for his work in merging the group he founded with two US businesses and one UK company, vastly expanding the potential market reach for the group.

Walsh has had his fair share of successes before now, attracting investment to Netwatch from a variety of sources. In December 2014, the company received €1 million from a Davy fund and, in June 2016, €9 million from BDO.

Founded by Walsh and his business partner in 2003, Netwatch introduced the first real-time remote monitoring security system to the Irish market and is now active across Ireland, the UK and the US. Netwatch uses a combination of high-quality security cameras and intelligent software to monitor client sites and detect suspicious events. It claims to have prevented more than 40,000 crimes since it was founded.

Originally from Kerry, Walsh intended only to stay in Carlow for a few months, but has ultimately spent a significant period of his life there and the company now sponsors the local rugby team and GAA stadium. Having grown up in a family household of 11, Walsh studied agricultural science in UCD and took his first job in Co Tipperary with a bio-science start-up. He subsequently worked for feed machinery company Keenan Systems, ultimately becoming managing director of the Irish operation.

But it was an incident involving a friend that led him to establish Netwatch. After his friend was attacked during a burglary, Walsh began having discussions with his business partner as to how properties could better be protected.

The newly formed Netwatch group has contracted revenues in excess of €60 million and will be monitoring 300,000 customer sites across four continents.

But the group’s sights are set further afield, with Walsh looking to grow revenues to €100 million by 2020. The way they’ll do that, Walsh believes, is by looking toward the ongoing legalisation of marijuana across the US and Canada. Already, they have about 130 cannabis sites in the US under their watch.

With Canada’s widespread decriminalisation, that market is firmly in their sites. “We’re trying to build something like the new Kerry Group, although we’re in a different sector, and we are going to do it out of Carlow,” Walsh said.

In May, Mainstream Renewable Power chairman Eddie O’Connor was chosen as Irish Times Business Person of the Month.

The accolade came after O’Connor oversaw the sale of a windfarm development off the Scottish coast to French utility Électricité de France (EDF) for a price reported to be more than €600 million. The Neart Na Gaoithe project will produce 450 megawatts of electricity, enough to power a city the size of Edinburgh, when it is completed, Mainstream said.

The sale prize appears to be a major coup for the company given that it came close to selling three years ago for €100 million. The deal at that time fell through when the Royal Society for the Protection of Birds brought a legal challenge against all such developments.

O’Connor himself has long been associated with renewable energy, founding Airtricity in 1997 before it was sold 10 years later for €1.8 billion. During that time, the company entered markets including Chile, North America and Europe to name a few, signing deals with major players including General Electric.

He then founded Mainstream in 2008 and the company has offices in seven countries across four continents and employs more than 160 staff.

O’Connor served as Mainstream’s chief executive for nine years before stepping into the chairman role in September 2017. And while he’s not directly involved in the day-to-day grind, O’Connor will be a substantial beneficiary if the group is sold, as its chief executive plans.

Before it does that, Mainstream plans to go into markets including Australia, Colombia, Vietnam and the Philippines.

Prior to his activity in renewables he was involved in an altogether different part of the energy sector. O’Connor was chief executive of Bord na Móna from 1987 to 1996 where he first decided to power forward with wind energy, building a commercial wind farm at Bellacorick in Co Mayo.

Originally a student of engineering, O’Connor subsequently attained a doctorate in business administration in addition to honorary doctorates from UCD, NUI Maynooth and the University of Hull.

Paddy Power Betfair chief executive Peter Jackson won The Irish Times Business Person of the Month award for June having struck a series of deals that leave it well-placed to be among the first European beneficiaries of a federal court ruling lifting a ban on sports betting in most US states.

The betting group first merged its US unit with New York-based fantasy sports specialist FanDuel, giving it 61 per cent of that merged business in exchange for assets and €135 million in cash. It has the option to take 80 per cent after three years and 100 per cent after five.

The two deals came after New Jersey’s state legislature passed laws which allow licensed betting on sports such as football, baseball and basketball.

Formerly the boss of Worldpay UK, Jackson took up his new role at the beginning of last year from Breon Corcoran and the move to Power Tower represented a big step up for the 43 year old. Prior to his Dublin move, Jackson had a series of chief executive roles including a five-year stint as the boss of foreign exchange group Travelex.

Born in Yorkshire, Jackson originally trained as an engineer and received a first-class honours degree from Cambridge University. He started his career at McKinsey, the consultancy, and went on to work at Lloyds Bank, Halifax Bank of Scotland and Banco Santander.

More recently, Jackson has been looking to put his stamp on the group, changing its corporate name to Flutter Entertainment plc as it pursues growth in the US. Although results in March saw profits fall, its quickening expansion is likely to see that trend continue in the short term.