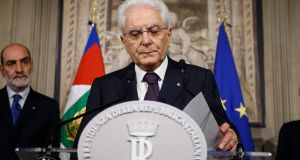 The crisis in the euro zone’s third-biggest economy escalated after Mr Mattarella on Sunday frustrated a bid by two populist parties to form a coalition.

Mr Cottarelli attempted to deliver a soothing message to markets, although he is widely considered unlikely to win a vote of confidence, which would trigger fresh elections by the autumn.

“The Italian economy is still growing and public finances are under control,” he said, before alluding to Europe policy, the cause of the confrontation between Mr Mattarella and the populist parties. “Dialogue with the EU to defend our interests is essential and we can do better, [but] it has to be constructive.”

But the message failed to register with investors amid the confrontation between the populists and the old political order. The yield on Italian two-year debt saw its biggest daily move since the height of the euro zone crisis in mid-2012, up 50 basis points on the day to hit 0.981 per cent.

The FTSE MIB index was also hit hard, led by bank stocks. In mid-afternoon trading in Milan, Italy’s main equities barometer was down 2.5 per cent, leaving the loss for the month of May at nearly 9 per cent and wiping out all gains this calendar year.

The appointment of Mr Cottarelli came after the collapse of coalition plans by the anti-establishment Five Star Movement and the far-right League, the big winners of Italy’s last general election in early March.

The Five Star and League alliance fell at the final hurdle, after Mr Mattarella blocked their proposal to nominate Paolo Savona, a eurosceptic economist, to be finance minister, in a dramatic stand-off on Sunday night.

His decision was hailed by France’s president Emmanuel Macron, who proclaimed his support for what he described as Mr Mattarella’s “courage” and “great spirit of responsibility” carrying out his “essential task, that of [protecting] his country’s institutional and democratic stability”.

But the short-term relief of other European governments at the prevention of a populist government in Rome was tempered by concerns that Mr Mattarella’s decision could embolden anti-establishment parties in Italy and elsewhere. Luigi Di Maio, the Five Star leader, called for a mass protest on June 2nd, a national holiday. “Last night was the darkest in the history of Italian democracy,” he said.

While Mr Mattarella has the constitutional power to approve or reject cabinet choices, his action was fiercely attacked by the two leading populist parties as a betrayal of the will of the Italian people.

Mr Cottarelli said he hoped to secure backing in parliament for a tenure that would last until the end of the year, so he could write next year’s Italian budget. But both Five Star and the League have vowed to oppose any technocratic solutions, so Mr Cottarelli is unlikely to win a confidence vote.

In that case, Mr Cottarelli said, his cabinet would remain in place as a politically neutral caretaker administration, until a new poll, which could take place “after August”. This means that even as he heads to the G7 summit and a pivotal European council in June, Mr Cottarelli may not be fully empowered.

On Monday morning, the populist leaders ramped up their attacks on Mr Mattarella for failing to get their own government across the finish line. “I have read and re-read the constitution and there’s no article that prohibits changing EU rules,” Matteo Salvini, the leader of the League, said in a radio interview, adding that “no one ever thought about quitting the euro”.

Mr Mattarella took the decision to block Mr Savona because he believed the appointment would jeopardise Italy’s ties to the EU, triggering further sell-offs of Italian assets in global markets. Mr Savona responded to Mr Mattarella in a blog post on Monday, saying he had suffered “serious damage from the top institution in the country on the basis of a paradoxical trial on my intentions of leaving the euro, and not those I believe in”.

The collapse of the mooted Five Star-League alliance brought a stunning end to the meteoric rise of Giuseppe Conte, a little-known civil lawyer, to the pinnacle of Italian politics. Mr Conte had been chosen last week by Five Star and the League to be prime minister, casting himself as the “defence attorney of the Italian people”.

Mr Conte had even received a phone call from Mr Macron on Saturday, before giving up his mandate on Sunday.

The League has been steadily gaining in opinion polls in recent weeks, suggesting that in a new poll it is likely to significantly outperform its March result, when it secured 17 per cent of the vote. Five Star, which emerged as the strongest party two months ago with 33 per cent of the vote, has stagnated in the polls.

Some political analysts said Five Star and the League might try to cement their budding alliance by teaming up ahead of the next vote, instead of reverting to their pre-election status of rivals. – Copyright The Financial Times Limited 2018