Economist says: ‘You got jobs at the cost of stealing revenues from other countries’ 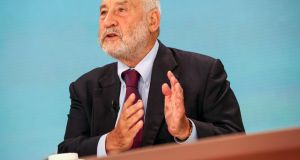 Economist Joseph Stiglitz says the Irish government is wrong to appeal the EU decision on Apple and its tax obligations. Photograph: Christopher Goodney/Bloomberg

He described comments by Minister Richard Bruton on RTE’s Today with Sean O’Rourke Show, in defence of the government’s position, as ‘utter balderdash.’

On the same programme Prof Stiglitz said: “the fact is that you were encouraging tax avoidance, you knew it.

“Let’s not make any pretence about it, you got a few jobs at the cost of stealing revenues from countries around the world. That’s the kind of activity that has to be stopped.”

He said that the question now was: “what are the rules of the game about tax competition, about state aid and it’s very clear if a company says that they got revenue associated with Ireland, you have to pay a tax on it.

Podcast: making sense of the ruling

“Whether that income was correctly attributed to Ireland is another matter. If Apple is saying that this is Irish income, you have an obligation to impose taxes on income that they say originated in Ireland.

“That’s what the issue is. They were booking it to an Irish subsidiary and they were not paying taxes.”

Prof Stiglitz said he found it mystifying that Ireland didn’t “just pocket that €13billion and use it for the enormous hardship that the people of Ireland have had to face.

“The argument that you will lose lots of jobs is absolute nonsense. It’s a new world, it’s very clear that the rules of the game have changed, under those new rules Ireland will have to compete on the basis of going forward, what it can provide economically.