Headline growth last year is estimated to have been 7.3% - EU Commission 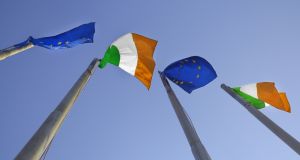 This year, the EU commission estimates Irish GDP growth to moderate to 4.4 per cent. Photograph: iStock

The economy grew by 7.3 per cent last year, three times faster than the wider euro area, according to new EU Commission estimates. The surge, driven by the activities of multinational companies operating here, would make the Republic the fastest-growing country in the EU.

Stripping out some of the contribution of multinationals, the EU Commission winter interim economic forecast finds that underlying domestic activity grew by 4.9 per cent in the first three quarters of 2017 - still double that of the euro area.

“Consumer spending and construction investment are forecast to drive GDP growth in the short term. Strong employment growth, particularly for full-time jobs, should underpin a rise in disposable income and household consumption over the next two years,” the commission said.

Suggesting that there is strong momentum ahead for the Irish economy, the commission signalled that investment in both residential and commercial construction will contribute “substantially” to the economic expansion.

On the broader picture, the commission warned that trade figures are heavily influenced by the activities of multinationals which, it says, are “subject to high uncertainty”.

For this year, the commission estimates that Irish GDP growth will moderate to 4.4 per cent, before slowing to 3.1 per cent in 2019. The 2019 projection is based on the assumption that trading relations between the EU27 and the UK will maintain the status quo. However, beyond that, the EU predicts that risks to the economic outlook are mainly linked to the outcome of Brexit negotiations between the UK and the EU.

The wider euro area and EU economies are both estimated to have grown by 2.4 per cent last year, the fastest pace in a decade. Economic commissioner Pierre Moscovici said Europe’s economy has entered “robust health”.

“The euro area is enjoying growth rates not seen since before the financial crisis. Unemployment and deficits continue to fall and investment is at last rising in a meaningful way. Economic growth is also more balanced than it was a decade ago - and provided we pursue smart structural reforms and responsible fiscal policies - it can also be more durable,” he added.

The commission raised GDP growth expectations for the EU this year to 2.3 per cent and to 2 per cent for 2019.

Inflation, meanwhile, is forecast to stay subdued in the euro area while Irish inflation will also remain subdued and is expected to pick up “only gradually”.