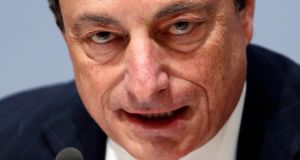 Ireland’s long-term borrowing costs remained near record lows yesterday on foot of a possible ratings upgrade from Moody’s later in the week and speculation that the European Central Bank (ECB) may cut interest rates next month.

Last week the yield on 10-year Irish bonds sank to an all-time low of 2.64 per cent, pushing the State’s borrowing costs below those of the UK for the first time in more than five years.

Investors are buying bonds of peripheral euro zone states amid signs the region’s debt crisis may be over.

The so-called “yield grab” was fuelled last week by comments from ECB chief Mario Draghi that policy-makers were prepared to add economic stimulus next month if needed, and by Moody’s decision to upgrade Portugal’s credit rating.

The agency is scheduled to review Ireland’s debt rating on Friday.

Record low
In trading yesterday the yield on 10-year Irish notes hovered around 2.66 per cent, marginally above last week’s record low, but still below its UK gilt equivalent. At the peak of the debt crisis in 2011, yields on Irish 10-year bonds were close to 15 per cent.

“This year to date has witnessed the vaporisation of negative outlooks amongst all the agencies, along with selective positive outlooks and/or ratings upgrades.

Last week’s €750 million auction of 10-year debt by the National Treasury Management Agency (NTMA) brought it to 81 per cent of its full-year funding target of €8 billion.