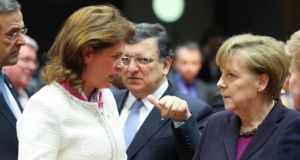 Germany has dampened expectations of imminent bank recapitalisations for Irish banks from the European Stability Mechanism bailout fund after yesterday’s agreement on a further pillar of the European banking union.

After 16 hours of talks through the night, European Union member states and the European Parliament agreed final details of a single resolution mechanism (SRM) to wind up failing banks.

Taoiseach Enda Kenny welcomed yesterday’s agreement as another “essential” stage in the euro area’s post-crisis path towards a banking union.

“This means that we’re moving towards the endgame in terms of having the structure put in place by which matters of recapitalisation can be considered,” he said, speaking on his way into a summit of EU leaders in Brussels. “And, as I’ve always said, that will apply on a case-by-case basis by the end of the year.”

German finance minister Wolfgang Schäuble agreed that yesterday’s deal marked a “great step forward for Europe” on the banking union, which he described as the “greatest European projection since the introduction of the euro”.


Mutual liability ruled out
While the political deal represented a sensible compromise, with Berlin giving ground on key points, Mr Schäuble insisted that it “still rules out mutual liability of participating member states”. Berlin officials were circumspect about the time it would take to complete the banking union’s final lap. For now, they said, Berlin’s priority was “pouring the SRM deal into a concrete structure”.

“Only then can we look further,” said a finance ministry spokesman.

After agreement in December 2012 on a single supervisory mechanism for banks, the SRM is the second of three pillars of Europe’s banking union with talks still outstanding on a third: a common deposit insurance fund. Until all three are in place, and the banking union is operational, Berlin declines to entertain even discussion of recapitalisations. The idea of establishing a common European banking deposit insurance fund is highly unpopular both with German banks and German savers and is likely to trigger a prolonged political debate there.


Late-night haggling
Yesterday’s agreement between member states and the European Parliament under the co-decision process follows agreement among member states in December. The centralised resolution body and accompanying €55 billion fund will be responsible for winding-up struggling banks.

After late-night haggling, including a reported 5.30am phone call to Mr Schäuble, euro-group president Jeroen Dijsselbloem emerged with a deal at 7am.

It has been seen as favouring smaller countries such as Ireland because it accelerates the pace at which the €55 billion fund will be fully mutualised. (The first SRM draft proposals envisaged a 30 per cent mutualisation in the first three years, with full mutualisation only after a decade.)

This was one crucial concession European Parliament negotiators wrung from Germany; another was reducing from 10 to eight years the transition period during which a pool of national funds would shift towards a shared fund.

According to Dutch MEP Corienn Wortmann-Kool the resulting resolution process will treat banks equally regardless of their home country.

“We want bail-in of creditors and investors to be applied in the same way to all banks irrespective of the member states these banks are located in,” she said, using the example of Ireland as compared with larger states such as Germany and France.

The plan agreed by member states in December would have seen, for example, French or German banks backed by a large fund allowing moderate bail-ins. An Irish bank with a smaller national fund would, under draft proposals, have been forced into a deeper bail-in, leading to higher funding costs, she said.

“This would definitely not be what we want to achieve in terms of breaking the link between sovereign and banking debt,” she said.

The agreement also envisages that the European Commission, rather than member states, will approve decisions made by the SRM’s board on resolving banks. MEPs were anxious to limit political interference from member states, though finance ministers will still have power to intervene in certain cases.

The European Parliament will now have to vote on the proposal at its plenary session in Strasbourg in mid-April, the last session before the European elections in May.