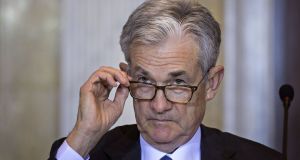 Jerome Powell, chairman of the US Federal Reserve: insists central bank is “removed from the political process” and will try to do the right thing for the economy. Photograph: Andrew Harrer/Bloomberg

Federal Reserve policymakers said they would forge ahead with further rises in interest rates, with some talking of pushing borrowing costs into restrictive territory, as the central bank seeks to prevent inflation from overshooting its target.

Despite outspoken criticism of rate rises from President Donald Trump, a number of Fed policymakers said in their September meeting that they thought it might become necessary to temporarily boost rates above levels they expect in the longer run. This would prevent inflation from getting too hot and ward off risks of financial excesses, the central bankers said.

A few officials thought policy should become “modestly restrictive” for a time, according to minutes of the meeting, held on September 25th and 26th.

“Participants generally anticipated that further gradual increases in the target range for the federal funds rate would most likely be consistent with a sustained economic expansion, strong labour market conditions, and inflation near 2 per cent over the medium term,” the record stated.

Fed discussions over how to keep the buoyant US economy on an even keel are taking place against a drumbeat of attacks from Mr Trump, who has in recent days accused the central bank of being out of control and called the institution his “biggest threat”.

Fed chairman Jay Powell has insisted the central bank is “removed from the political process” and will continue to try to do the right thing for the economy.

The latest minutes indicate Fed policymakers are united in pushing ahead with further rate rises, suggesting the president’s complaints are not shaking them from their tightening path. The question remains how far the tightening will go. The record shows two participants declaring an opposition to moving policy into restrictive territory absent clear signs of overheating.

During the meeting, the Fed decided to lift rates by a quarter-point for a third time this year, leaving its target range at 2 to 2.25 per cent, and to point the way to a fourth increase before the end of the year. The central bank has now boosted rates eight times in the current cycle, and Mr Powell has suggested further upward moves are likely next year.

The prospect of rates reaching neutral levels – those that neither boost the economy nor hold it back – has opened up a debate over the extent to which officials want to clamp down on the economy by increasing them further.

In their September discussion, a number of participants said they thought it would be necessarily to “temporarily raise the federal funds rate above their assessments of its longer-run level in order to reduce the risk of a sustained overshooting of the committee’s 2 per cent inflation objective or the risk posed by significant financial imbalances”.

Officials are responding to above-trend growth, a steady tightening in the jobs market and inflation that has largely returned to the central bank’s 2 per cent target. Policymakers have also been watching surging asset values and corporate borrowing for evidence that financial stability risks are rising, adding to arguments in favour of further tightening.

Since the Fed’s last meeting in September, the stock market has seen a sell-off driven in part by upbeat comments from Mr Powell in early October. The chairman suggested rates were a long way from neutral levels – those that neither boost the economy nor hold it back.– Copyright The Financial Times Limited 2018