Fears Greek deal will not be agreed ahead of eurogroup

Discussions between Greek officials and negotiators end prematurely in Brussels 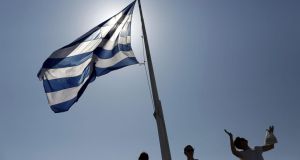 Tourists stand under a Greek national flag atop the Acropolis hill in Athens, June 14th, 2015. Greek prime minister Alexis Tsipras said he was willing to accept unpalatable compromises to secure a deal with international creditors provided he gets debt relief in return, something that Germany refuses to countenance. Photograph: Kostas Tsironis/Reuters

There are increasing fears that a last-ditch deal for Greece will not be agreed before Thursday’s key eurogroup meeting.

It comes after discussions between Greek officials and negotiators ended prematurely in Brussels on Sunday evening.

Informal talks resumed between Greek officials and representatives of its creditors on Saturday afternoon in Brussels and recommenced on Sunday, but the meeting ended early amid sharp differences between the two sides.

A European Commission spokesman said “a significant gap” remains between the two sides, equating to 0.5 to 1 per cent of GDP - the equivalent of €2 billion of fiscal measures on an annual basis.

Despite attempts this weekend to find a solution ahead of the eurogroup meeting, the talks “did not succeed”, the spokesman said.

“There remains a significant gap between the plans of the Greek authorities and the joint requirements of the Commission, ECB and IMF [...]President Juncker remains convinced that with stronger reform efforts on the Greek side and political will on all sides, a solution can still be found before the end of the month.”

With euro zone finance ministers scheduled to meet in Luxembourg on Thursday there is widespread conviction that a deal needs to be agreed before the eurogroup to ensure a new reform deal can be ratified by national parliaments.

In a sign of hardening public opinion in Germany, Sigmar Gabriel, the head of German Chancellor Angela Merkel’s junior coalition partner the Social Democrats, said that, while he wanted to keep Greece in the euro, patience was running out in Europe.

“Not only is time running out but so too is patience across Europe,” the vice-Chancellor wrote in the Bild newspaper. “The shadow of an exit of Greece from the euro zone takes on an ever clearer shape.

“Repeated apparently final attempts to reach a deal are starting to make the whole process look ridiculous. There is an ever greater number of people who feel as if the Greek government is giving them the run-around.”

While Mr Gabriel has previously indicated a certain level of support for Syriza’s position, his message chimes with deepening public frustration with Greece in the euro zone’s largest country.

With the Greek crisis dominating the front pages of Germany’s weekend newspapers, a poll for television station ZDF on Friday showed 51 per cent of Germans want Greece to leave the single currency, with 70 per cent opposed to further concessions for Greece.

While talks at official level were cut short in Brussels, discussions could take place between German Chancellor Angela Merkel and Greek prime minister Alexis Tsipras in the coming days in a bid to secure some kind of deal. As Greece’s biggest creditors and the euro zone’s largest economy, much is staked on Chancellor Merkel’s next move in the crisis.

Asked if he believed the lenders’ were “bluffing” in their refusal to consider counter-proposals presented by Greece, Mr Varoufakis said “I hope so.”

He again criticised the institutions’ stance: “If you look at the latest proposal from the IMF and from the Commission, it is just the kind of proposal that one puts forward if one does not want an agreement,” the finance minister said.