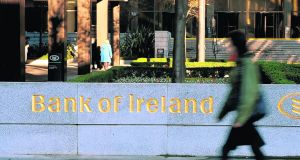 Bank of Ireland had the most negative impact on the Iseq on Friday and closed down by 6.1 per cent on the day. Photograph: Aidan Crawley/Bloomberg

The Iseq overall index bucked what seemed to be the trend earlier in the week and closed up, albeit marginally, by 0.04 per cent.

That result came despite Bank of Ireland weighing heavily on the index. Downward momentum gathered early in the day and continued throughout. According to traders it was the increased pension deficit at the bank that drove the stock down, which ultimately fell by 6.1 per cent at €0.231.

Thursday proved to be a tough day for Kingspan after an earnings report sent the stock down, however, the stock recouped some of those losses on Friday and closed up by 2.19 per cent at €31.935.

Ryanair was also driven down on Thursday as American Airlines put pressure on stocks worldwide but the Michael O’Leary led airline just fell short of the €16 mark on Friday but still closed up by 1.98 per cent at €15.95.

Nutrition and ingredients group Glanbia ended a week that saw the stock fall on the back of poor quarterly results. Again, that stock closed down by 1.84 per cent on Friday.

British bank Barclays fell 5.1 per cent after its investment bank missed out on a bond-trading boom that saw earnings surge at its Wall Street rivals, even though its first-quarter profit more than doubled.

Shares in Mediclinic dropped more than 4.42 per cent, pulling back after a 17.5 per cent jump in the previous session after Abu Dhabi cancelled a 20 per cent co-payment requirement for treatment at private facilities.

Miners were among the top gainers, however, with Antofagasta , BHP Billiton, Rio Tinto, Glencore and Anglo American all up between 1.06 per cent to 2.38 per cent as the price of copper edged higher.

Shares in Micro Focus jumped 1.45 per cent, supported by a positive note from Deutsche Bank which began its coverage of the British mainframe computers operator with a “buy” rating.

The pan-European index ended the week up 2.5 per cent – its strongest week since December – as fresh money poured into the region’s equities on the back of the market-friendly outcome of the first round of France’s presidential election. It sealed a third straight month of gains, and was just off fresh 20-month highs hit on Wednesday.

On the day, shares in UBS rallied 2.2 per cent, touching a three-month high as a long-awaited turnaround in its core wealth management business helped Switzerland’s biggest bank deliver its second-best start to a year since the financial crisis.

Austrian oil and gas company OMV jumped 8 per cent to a 9-year high after its first-quarter profit nearly tripled thanks to higher oil prices and better sales.

Gemalto fell 7.2 per cent, the biggest faller on the STOXX after the Dutch digital security firm cut its 2017 profit forecast due to slow adoption of chip-enabled payment cards in the United States.

The Nasdaq Composite opened at a record high, propelled by gains in Amazon. com and Google parent Alphabet, and is on track to post gains for the sixth straight month.

Intel fell after the company reported lower-than-expected quarterly revenue. The stock was the biggest drag on the three indexes.

Oil majors Exxon and Chevron were up after the two companies reported quarterly profits above expectations.

1 Don’t expect a bonanza for Ireland from the EU’s €750bn recovery cash
2 Angela Merkel sweeps in to save the euro zone
3 In six months we will be in the grip of a 1980s-style recession
4 Perrigo tells court of ‘very high level of unfairness’ in €1.64bn Irish tax bill
5 What will it take to reopen the world to travel?
6 Property price drop of up to 12% this year a ‘reasonable’ assumption – McDonagh
7 ECB gives ailing euro zone economy another shot of stimulus
8 Chartered Land moves closer to approval for Dublin’s tallest tower
9 Cycling made easier with an Irish-made electric bike
10 Remaining McDonald’s drive-through restaurants now open
Real news has value SUBSCRIBE