There are gains for all top rate tax payers, unlike the poorest households 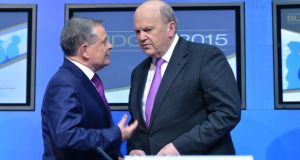 Minister for Public Expenditure and Minister for Finance Michael Noonan giving a joint Budget 2015 press conference: a return to growth has given them room to manoeuvre. Photograph: Alan Betson

After seven lean budgets, a return to growth has allowed room to manoeuvre. Key elements contributing to this include a rise in employment, a fall in unemployment and a shift towards user charges financing for water.

In assessing the impact on living standards, we take into account the direct tax and welfare package and next year’s water charges.

The full picture is captured by Switch, the ESRI tax-benefit model, drawing on data from more than 4,500 households in the CSO’s Survey on Income and Living Conditions.

The ESRI model has long been used to analyse the impact of income tax and welfare policy changes, and has recently been extended to explore the impact of water charges, based on average consumption levels and Irish Water’s price structure. Like most such models internationally, the ESRI model examines the immediate distributive impact of the overall budget package chosen before any responses in labour market or other behaviour.

Most of the major elements of Budget 2015’s direct tax and welfare packages are covered by this analysis, including changes to rates and bands of income tax and universal social charge (USC), child benefit, the Christmas bonus and the Living Alone Allowance. The pension levy is the main exception: by its nature, it is very difficult to attribute gains from its reduction to individual taxpayers, and it is not included here.

The household benefit package element of the water compensation package had been pre-announced and is modelled precisely. For the tax credit and fuel allowance elements announced on budget day, we have included approximations – more refined estimates will be produced, but they are not expected to affect the broad patterns of impact identified here.

The Back to Work family dividend is designed to improve the financial incentive to work for unemployed people with children. We will be analysing its impact in this respect in the coming months but it cannot be included here.

The overall impact of tax, welfare and water charges on households is very small, when compared with a neutral budget, which indexes tax credits and welfare payments in line with expected wage growth of 1.5 per cent. However, the impact varies significantly by income group, as shown in the chart.

There are smaller losses, declining as income rises, for other income groups, while for the one-fifth of households with the highest incomes, there is a gain of about 0.5 per cent. The pattern is a regressive one, but the scale of the impact is small. The degree to which top rate taxpayers are concentrated in high income households is critical to understanding these results. Close to six out of 10 such taxpayers are in the top 20 per cent of households. Thus such households are likely to see the greatest gains from a top rate tax cut.

There has also been some confusion over the impact of the cut in the top tax rate, combined with an increase in the USC rate for those with incomes above €70,000.

A simple top rate tax cut would cost more than €230 million in a full year. The rise in USC claws back close to €100 million of this, by capping the gains of those on the highest incomes at the same level as those on €70,000. There are, however, gains for all top rate taxpayers.

In the present context, relevant evidence includes not only the immediate impact of Budget 2015, but also the broader backdrop of the impact of budgetary policy since the first of the austerity budgets in October 2008. This is also illustrated in the chart.

For most income groups, the cumulative losses imposed by austerity policies have been between 10 and 11 per cent. For the top income group the policy-induced losses – including the impact of Budget 2015 – are now close to 14 per cent.

More detailed analysis of these issues will be provided later this year, in an article for the ESRI Quarterly Economic Commentary. The writers are researchers at the ESRI