Economic uncertainties of an independent Catalonia

‘Propaganda war’ between separatists and unionists pivots on EU membership 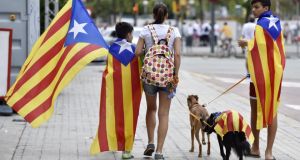 Perils of protest: Not only does Catalonia risk leaving the euro, it could could also see FC Barcelona barred from playing in the Spanish league. Photograph: Gerard Julien/AFP/Getty Images

Catalonia would be excluded from the European Union if it broke away from Spain, according to opponents of the region’s independence drive. They also claim it would struggle for international recognition, get bogged down in domestic political spats and even see its flagship soccer team, FC Barcelona, barred from playing in the Spanish league.

While those who want independence fiercely contest these scenarios, another issue has dominated the debate: the economic impact of secession.

On Sunday, Catalans will vote in a regional election that nationalists are using as a plebiscite on independence. If regional premier Artur Mas and his coalition of pro-independence politicians and grass-roots candidates gain a majority of seats in the Catalan parliament, they plan to begin the process of creating a new nation, in defiance of the Spanish state.

Last Monday, the chairman of the Bank of Spain, Luis María Linde, warned that such an eventuality could have devastating consequences for the north-eastern region of 7.5 million inhabitants.

“Catalonia’s exit from the euro would be automatic,” he said during a panel discussion in Madrid. “If there were serious tensions there could be a deposit freeze, as we’ve seen in Latin America and Greece.”

Those comments came just three days after two banking associations issued a joint communique on the risks of independence for Catalonia, which they said included exclusion from the euro zone, judicial insecurity and the choking of credit.

Santander and BBVA, both major international lenders, put their name to the document, as did Catalan banks Sabadell and CaixaBank.

“It is irresponsible and indecent to make threats that nobody in a democratic country would dare suggest. They do it because they have no other arguments,” he added.

Mas also threatened to shelve Catalonia’s share of its public debt obligations – estimated at around €180 billion – leaving the Spanish state to pay them instead. But despite their glaring differences, what separatists and unionists do agree on is the economic importance of the region.

Representing just under a fifth of Spanish GDP, Catalonia is the wealthiest of the country’s 17 regions. As well as being home to several large banks, it boasts energy firm Gas Natural, carmaker Seat and infrastructure giant Abertis. But small and medium-sized businesses make up over 90 per cent of the region’s output.

“Here in Catalonia we lean towards a production-based economy, whereas Madrid relies more on a financial, speculative economy,” says Albert Pont, president of the Catalan Business Circle and a supporter of independence. “Catalonia is the country’s main industrial hub even though the recent economic crisis damaged that sector a lot.”

Its prestige is underlined by membership of a co-operation agreement – the Four Motors for Europe – with three other highly industrialised regions: Rhône-Alpes in France, Lombardy in Italy and Baden-Württemberg in Germany.

Catalonia’s jobless rate is 19 per cent, slightly below the Spanish average of 22 per cent, while GDP per capita is €27,000, behind only the Basque Country and Navarre. Being so far ahead of poorer regions – Extremadura per capita GDP is less than €16,000 – fuels the separatists’ familiar complaint that they are subsidising the rest of Spain.

Much of the debate over whether or not Catalonia could go it alone centres on its possible exclusion from the European Union and, consequently, the euro currency. The Bank of Spain’s governor isn’t the only one warning of such an outcome.

German chancellor Angela Merkel and British prime minister David Cameron both recently supported the Spanish government’s view that an independent Catalonia would have to reapply for EU membership.

The counter-argument of separatists is that the EU desperately needs a productive, dynamic region like Catalonia and that pragmatism alone dictates that after gaining independence it will either remain within the bloc or be swiftly reincorporated.

“There’s a big propaganda war going on,” says Carlos Rivadulla, vice-president of Empresaris de Catalunya, a business association founded to promote union with Spain. “Some say independence won’t affect [the economy], others say it will and those of us who say it will get accused of manipulation. But there are concrete data.”

Among the figures Rivadulla points to is the 16 per cent drop in foreign investment in Catalonia last year, compared to a 10 per cent increase in the rest of Spain. Rivadulla does not believe Catalonia will gain independence, but he says the uncertain political climate generated by the separatist drive is spooking investors.

Steen Jakobsen, chief economist at Saxo Bank, is not concerned about Catalonia’s EU membership, believing it would be allowed back. However, a more pressing concern for him is how the markets would respond if Mas’s coalition requires, as polls suggest, the support of the radical Popular Unity Candidacy in order to clinch more than half of seats after Sunday’s election.

“That majority would be based on the support of a far-left party which has made it very clear they want to oust the Catalan president [Mas], which of course is going to create turmoil,” Jakobsen said.