Dublin ranks 33rd out of 231 cities for quality of living

European cities lead way in quality of living and safety, according to Mercer rankings 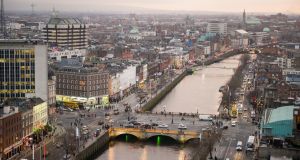 Dublin ranked in 33rd place, ahead of London, Paris and Madrid, in a quality of living survey that took more than 230 cities into account.

Human resources consultancy Mercer found that Dublin rose one place in the ranking due to a stable political environment, lower levels of air pollution and a strong socio-cultural environment.

Vienna topped the survey for the 10th year in a row, followed by Zurich, Auckland, Munich and Vancouver. London placed 41st, Edinburgh was 45th and Belfast 64th.

In the US, New York placed 44th and Washington DC came 53rd while Detroit remained the US city with the lowest quality of living, in 72nd place.

“While Dublin has opportunities for improvement with regard to transportation and the availability of international schools, the results once again demonstrate that it is an attractive location for international businesses to send their employees,” said Mercer consultant Noel O’Connor.

European cities were found to have the highest quality of living in the world, with Berlin ranking in 13th place. Paris came in 39th place, while Madrid rose three places to 46th and Rome climbed one place to 56th.

As a country Australia ranked quite high, with its major cities remaining in the top 20 for quality of living and in the top 50 for safety.

The safest European city was Luxembourg, followed by Basel, Bern, Helsinki and Zurich in joint second. Dublin placed 32nd, ahead of all UK and Irish cities surveyed as well as Milan, Rome and Madrid. The least-safe city was found to be Damascus in Syria, while the city with the poorest quality of living was Baghdad in Iraq.