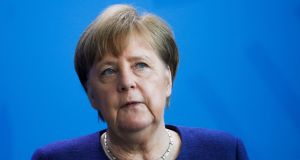 German chancellor Angela Merkel: “It must be in the interest of everyone and of Germany that Europe emerges stronger from this test.” Photograph: Markus Schreiber

The European Union is facing the biggest challenge since its foundation, chancellor Angela Merkel warned on Monday as she stressed Germany’s readiness to help revive the continent’s economy once the coronavirus pandemic subsides.

“Everyone has been hit equally by this and it must be in the interest of everyone and of Germany that Europe emerges stronger from this test,” Dr Merkel said in a press briefing before crucial talks among finance ministers over the EU’s crisis response on Tuesday.

Her comments come as economists and politicians in Germany question the previous consensus against pooling debt liability.

That mirrors a debate in the Netherlands, where prime minister Mark Rutte is coming under increasing pressure domestically – including from within his own coalition – to soften the Dutch position on the so-called corona bonds, with stinging accusations that he is failing to recognise the new pan-European reality of Covid-19.

Mr Rutte’s critics include the governor of the Dutch central bank, who has warned that, while a conservative fiscal policy is normally politically popular in the Netherlands, it may not be an appropriate response to a potentially lethal pandemic.

“This is a test for the euro zone”, said the governor, Klaas Knot. “When we see what’s happening in countries such as Italy and Spain, I personally find the call for solidarity extraordinarily convincing.”

Mr Knot said such solidarity could take one of two forms: either corona bonds or credit lines issued by the European Stability Mechanism (ESM), the euro zone’s permanent bailout fund for struggling economies.

Both Mr Rutte and Dr Merkel have indicated that ESM credit lines could be an acceptable compromise if they come with strict conditions attached.

Within the coalition, the toughest criticism has come from centre-left D66, whose leader in parliament, Rob Jetten, tweeted: “The Netherlands became rich as a result of the EU. Now that jobs and incomes are at stake throughout Europe . . . we cannot let our friends suffocate. Only together can we survive.”

“The Netherlands, like other governments, sometimes enjoys being ‘a little bit stubborn’,” said D66 MEP Sophie in’t Veld. “But they’re playing with fire, because if Italy falls, then the euro zone and the EU fall, and we fall as well.”

Another of Mr Rutte’s coalition partners, Gert-Jan Segers of Christian Union, called for “a new Marshall Plan” for southern Europe. “Italy is a tragedy. The country is in ruins. As far as I’m concerned, the first message should be: we’re going to help you.”

Meanwhile, figures from the European Central Bank show that it dived into the fight to save the economy from coronavirus last week with more than €30 billion of bond purchases up to close of business on Wednesday.

It has also skewed purchases toward Italy. A breakdown for the month of March showed it bought €11.9 billion of Italian sovereign bonds under the asset purchase programme, far more than normal for the euro zone’s third-largest economy. – Additional reporting, Bloomberg

1 Michael Smurfit: ‘I asked Trump to invite me to the White House for my 80th birthday’
2 Household savings soar as consumers stop spending
3 ‘I’m so lucky to be in the Caribbean – a million miles from Derry Girls’
4 ‘The recovery needs to be a full-scale economic renewal’
5 Small businesses are cannon fodder in zealous anti-virus experiment
6 ‘Never mind GDP; the most fundamental job of any leader is to keep his people alive’
7 Tax and the Pandemic Unemployment Payment: Your questions answered
8 Iput secures €200m in ‘green finance’ for delivery of new LinkedIn HQ
9 ‘It’s safe to fly’, EU aviation safety boss says
10 Irish business of Carluccio’s restaurants to be wound up
Real news has value SUBSCRIBE