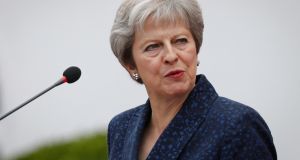 German business leaders have raised the alarm over the state of Brexit negotiations and are urging the UK government to soften its position ahead of make-or-break talks with Brussels in the coming weeks.

“We have reached a critical phase. The time that remains is incredibly short,” said Joachim Lang, the director-general of Germany’s BDI industry federation.

The warning echoes concerns expressed last month by the chairman of Keidanren, the influential Japanese business lobby, and highlights growing anxiety among corporate leaders that Britain could topple out of the EU without an accord to smooth the process.

“If there is no agreement by mid-November, German companies will start implementing their emergency plans for a no-deal Brexit, ” Mr Lang said. “In a no-deal scenario, and without a transition phase, we would end up with a border and customs regime that no one is prepared for. There would be considerable uncertainty, there would be interruptions to supply chains and the UK industrial base would take a hit.”

Mr Lang also voiced criticism of the UK position as set out in London’s recent Brexit White Paper, in particular with regard to its proposal on trade. Among other points, the paper calls for a post-Brexit scenario in which the UK remains part of a single market for goods with the EU, while excluding the free movement of services, capital and people.

“The UK says it wants to keep the free movement for goods but become independent with regard to the other freedoms. We believe that cannot work,” said Mr Lang. Separating goods from services and the flow of people and finance, he added, was simply not possible in the modern economy.

Both Mr Lang and Bernhard Mattes, the president of Germany’s VDA car industry federation, made clear that German industry continued to support the negotiating stance of the European Commission, which has led the Brexit talks on the EU side and has been the target of intense criticism in the UK.

Prominent Brexit supporters have long voiced hope that German and European business leaders could put pressure on Brussels to offer the UK a favourable Brexit deal. That hope, however, has yet to materialise. “We need to be realistic, 60 per cent of German exports go to the EU. Only 7 per cent go to the UK, and that share is falling steadily – also as a result of Brexit. That means we know exactly where to put our emphasis. We want to strengthen the EU27, and limit any damage linked to Brexit,” said the BDI’s Mr Lang.