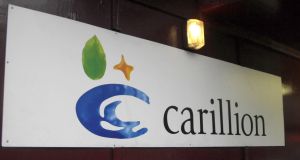 The group is one of the companies building the HS2 London to Birmingham rail line and employs more than 40,000 people worldwide

The UK’s Financial Conduct Authority is investigating the outsourcing and construction group Carillion over financial statements it issued in the run-up to a July profit warning that wiped out three quarters of its market value.

The group, which is one of the companies building the HS2 London to Birmingham rail line and employs more than 40,000 people worldwide, said on Wednesday that the FCA was investigating “the timeliness and content of announcements made by Carillion between 7 December 2016 and 10 July 2017”.

Carillion, which said it was “co-operating fully with the FCA”, had issued statements ahead of the July 10th profit warning that were broadly upbeat.

Richard Howson, the group’s former chief executive, spoke at Carillion’s annual general meeting in May of “an encouraging start to the year in terms of winning new business in our chosen markets”. He added that trading conditions across the business were “largely unchanged since we announced our 2016 full-year results in March”.

Carillion announced Mr Howson was leaving at the same time it issued its July profit warning, which revealed a sharp increase in debt and an £845 million (€950 million) provision for losses on its contracts.

“There was no doubt at the time that the company was taking an optimistic view,” said Stephen Rawlinson, support services expert and the director of boutique consultancy Applied Value.

“But the sort of deep provisions that came out [in July] were outside what I would have expected.”

In November, two months after new finance chief Emma Mercer started her job, Carillion warned it would breach its banking covenants. Its lenders have since agreed to defer the date at which Carillion must pass key financial health tests to April 30th this year.

Carillion shares fell as much as 8 per cent after the news early on Wednesday morning.

The FCA, which has not made its own announcement about its investigation into the timing of Carillion’s financial statements, is becoming tougher on companies that it suspects have taken too long to announce bad news.

The market watchdog is also investigating the timing of a profit warning issued by UK outsourcer Mitie Group in September 2016.