Heather McGregor flew herself over to Dublin for a high-powered sit-down of Irish businesswomen. ‘We can have it all,’ she says. ‘Just not always at the same time’ 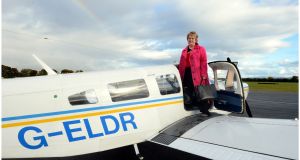 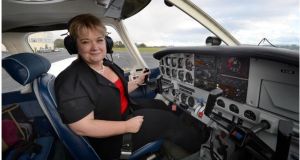 Heather McGregor, AKA Mrs Moneypenny, photographed after flying in to Weston Airport to attend an evening where she will address 600 business women.Photograph: Brenda Fitzsimons / THE IRISH TIMES 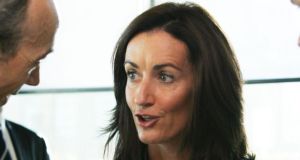 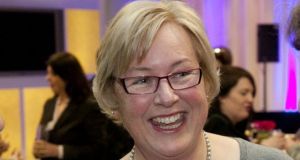 Women in business should reach for the sky, equality advocates are heard to say. It appears some women take this adage more seriously than others.

Yesterday a blue-striped, single-engine Cessna winged its way from an airstrip near London and touched down around noon at Weston Airport in Leixlip, just west of Dublin. It was flown by Heather McGregor, a businesswoman and Financial Times columnist better known by her pen name, Mrs Moneypenny.

McGregor, who owns and runs the Taylor Bennett executive search business in London and has written books and an irreverent FT column for 16 years, flew in for a gathering of high-powered Irish businesswomen at the Merrion hotel.

When it comes to the issue of prominent women in business, it isn’t always men who do the stereotyping. The loudest voices in modern feminism are predominantly on the left. Many of them have an enmity for business, including successful businesswomen who don’t pretend to act like men.

This is McGregor’s territory.

Speaking ahead of the Gloss event, she said the last time she flew to Dublin, in 2012, she emerged from her plane to be met by a photographer whose picture later appeared in The Irish Times.

“My hair was all over the place and I had no lipstick,” she said. “So, this time, I will have a hairbrush and lipstick in the cab of the plane.”

McGregor, who is 54, didn’t learn to fly an airplane until she was 46.

“I’m renting the Cessna for £100 per hour. The best bit about flying over is that Dublin’s air traffic control takes over from Manchester or Liverpool when you’re halfway across the Irish Sea. I love getting that welcome in an Irish voice.”

Mrs Moneypenny’s audience last night was not a bunch of wide-eyed youngsters, wondering how to take their first steps in business. The guest list included some of the most powerful women in Irish industry.

Among those due to attend were Caroline Keeling, chief executive of the Keeling’s fruit business in Dublin, which employs more than 2,000 people; Rosemaree Danaher, chief executive of Intel in Ireland; Barbara Cotter, a former A&L partner and director of the Strategic; Aileen O’Donoghue of the Irish Stock Exchange; and Françoise Riou, general manager of Sanef ITS, which manages the tolling system eFlow.

“They have all achieved already,” said McGregor. “It isn’t appropriate to tell them to step forward. They’ve done that already.”

She spoke about the importance of having trusted corporate and personal financial advisers. Faced with a particularly difficult problem, she says, the response from some women (and men, presumably) can be: “I can’t do it.”

“You need to add the word ‘alone’ to the end of that. You just can’t do it alone.”

Aisling Dodgson, Investec’s head of treasury, and Sheena Doggett, a partner of A&L, joined McGregor for a panel discussion. Dodgson also gave a speech about issues for women, including the need to take control of personal finances.

McGregor said she hoped the women present would leave the event with the determination to “do something different”. Making a will would be a good start, she said.

Speaking earlier in the day, she also mused upon the glass ceiling: “Women and men are different. They’re conditioned differently. Women also don’t build networks in the same way as men.”

All barriers are moveable, McGregor said, although she was sceptical that women can simultaneously “have it all” with a full career and family life. (McGregor had three children and still manages to run her business.)

“We can have it all. Just not always at the same time. Women, inevitably, are the ones who have the babies.”

There is still plenty of plain vanilla sexism in business.

“There are often different languages used for men and women in business,” she said. “You don’t often hear comments about ‘strident’ men.”

McGregor is due to give a further talk to Investec employees today, as well as an interview to RTÉ.

This being a proud republic, we don’t have much truck with lofty titles and suchlike. But last year McGregor did receive a CBE in the Queen Elizabeth’s birthday honours list.

Perhaps the monarch is a fan of Mrs Moneypenny’s financial advice. Watch out, Coutts.

A 2013 Süddeutsche Zeitung piece, Conned: A German view of Ireland, which was translated and reprinted in The Irish Times, keeps making sudden reappearances years later on this newspaper’s list of most-read articles.

The premise of the article was that Ireland’s betters have for years sold citizens down the river, which is probably true in the round. What is less clear, however, is the efficacy of the central plank of the author’s argument: that Ireland sits in a bounty of valuable oil and gas reserves destined to make capitalists rich on impossibly generous fiscal terms, while the natives are left in penury.

There is a reason why Ireland offers generous tax rates and terms to encourage drilling: the oil and gas industry here is a basket case. It has been for years, and very few people, apart from the lawyers, accountants and stockbrokers who act as advisers to exploration companies, have ever made a bean from it.

Süddeutsche Zeitung, for example, makes repeated references to the huge opportunities for Providence Resources, which has always been closely linked to the family of Sir Anthony O’Reilly. Tony jnr is chief executive.

That a tycoon family was set to clean up on natural resources at the expense of the Irish people might have been an alluring narrative for a German visitor to Ireland in 2013. But it hasn’t happened. And it probably won’t.

Providence is this month close to running out of cash and is locked in talks with its creditors. It is sitting on decent reserves of oil at Barryroe, that’s true. But as it has found, getting the money together to get the stuff out of the ground profitably is another matter entirely.

About €3 billion has been spent over the last half century drilling up to 150 wells off the Irish coast. Only two commercial discoveries have been brought to fruition in that time. One is the Corrib gas field, which for Shell was like giving birth to a baby elephant due to its mishandling of protests that then spiralled. The other is the Kinsale gas field in the Celtic Sea.

Nobody has ever drawn oil from Irish territory for commercial resale. Not a single drop. Irish exploration companies only ever create value when they focus on projects abroad. See Tullow Oil or Petroceltic.

The Irish-headquartered and Dublin-listed oil and gas company, Aminex, is focused on Egypt, Moldova and Tanzania, where it is producing gas. Its chief executive, Jay Bhattacherjee, was in Dublin this week drumming up support from its local shareholder base, which is not far off 10 per cent.

Bhattacherjee says Aminex has no interest in the Irish sector because there is no industry infrastructure here.

“The fiscal terms are good in Ireland, but the industry in Ireland needs to start somewhere,” he says.

We are a long time waiting on this mythical Irish black gold rush.

Switching between A&L Goodbody and Arthur Cox is like making the move between Old Trafford and Anfield or Camp Nou and the Bernabéu. It doesn’t happen often, but it matters when it does.

Cian McCourt, former head of A&L’S New York office, is one treading the path after joining Arthur Cox as a corporate partner. Does this make him the Luis Figo of Irish law firms?

McCourt was in the spotlight for very different reasons two years ago when his wife gave birth to their daughter on a Manhattan sidewalk.