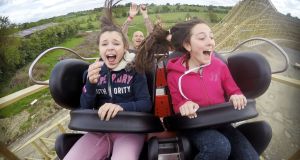 Tayto Park is aiming to build the attraction next year and to open it to the public in 2021. Meath County Council has given the green light to the project attaching 26 conditions to its decision.

The rollercoaster will be the same height as the park’s existing 32-metre high wodden ride, Cú Chulainn, but will be 400 metres longer.

The council gave the plan the go-ahead in spite of a small number of objections from locals.

However, the opposition to the rollercoaster – which is expected to create an additional 40 full-time and part-time jobs at the park – raises the threat that the decision may be appealed to An Bord Pleanála.

A 189-page environmental impact statement (EIS) lodged with the planning application outlines the need for Coaster 2021 for the future of Tayto Park.

It states that if the Tayto Park operators do not add a major attraction at this time, “the longer-term viability of the park would be brought into question”.

It adds that international experience relating to theme parks illustrated that the introduction of new attractions was required to maintain and strengthen market position and customer interest.

“There is a need to add new attractions every two to three years to maintain visitor numbers.”

Two of those to oppose the project are local residents Donal Greene and Clare Smith.

In their objection, they said: “We feel that the proposed new development will have a serious negative long-term impact on our peaceful enjoyment, and critically the long-term value of our home. We currently experience noticeable noise pollution from the park and the existing rollercoaster and the train whenever the park is open.”

They said the new rollercoaster would be 700 metres from their property, and be directly visible from their back garden. “We chose to live in this area with the expectation of a quiet environment to raise our small children.”

Joseph Doyle from Kilbrew also objected over the lack of local community neighbour consultation and the impact of the project on residential amenity including privacy, noise levels and increased litter.

Mr Doyle claimed the proposal would generate increased traffic to an area that already had a significant traffic issue.