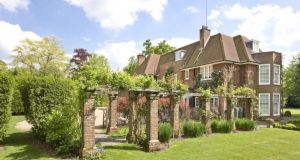 Gayle Killilea, the estranged wife of bankrupt developer Sean Dunne, sold her home in England’s stockbroker belt in February for €10.2 million (£9 million), likely almost doubling what she paid for it.

UK public records show that the Surrey property was sold to businessman Christian Candy, who, along with his brother Nick, is among the best known and most affluent property developers in the UK.

The house is one of several properties that featured in a US legal action taken by Mr Dunne’s American bankruptcy trustee who claimed that he transferred tens of millions of euro in assets to his wife.

Ms Killilea, Mr Dunne and John Dunne, a son from his first marriage, were defendants in the action, which on Tuesday found that Ms Killilea must pay US bankruptcy trustee Richard Coan over €18 million. In a civil trial at the US district court in Connecticut, a jury found that certain transfers betwene the couple, including the contentious purchase and sale of Walford in Dublin’s elite Shrewsbury Road, were fraudulent.

It found for the couple in relaiton to a number of other transfers.

The trustee, Connecticut bankruptcy lawyer Rich Coan, had claimed that the assets had been transferred to shield them from creditors who are owed more than €700 million.

The couple said the transfers predated Mr Dunne’s financial troubles and were years before he filed for bankruptcy in the US in 2013. They said they were completed to secure her and her children’s future.

Mr Coan was attempting through his legal action to reverse the asset transfers or the equivalent money back for the benefit of Mr Dunne’s creditors, which include the State-owned National Asset Management Agency.

Among his complaints were the claim that the millions of pounds used to purchase the English property, known as Belgravia House, was a benefit Ms Killilea received as a result of earlier transfers.

The property is about 40km west of central London, near Windsor and Eton and not far from Heathrow airport.

A ruling made by US judge Jeffrey Alker Meyer this month makes reference to Belgravia House, as the Dunnes sought to preclude Mr Coan from introducing evidence regarding the UK property to the case.

The bankruptcy trustee, who has been managing Mr Dunne’s bankruptcy estate since 2013, argued that Belgravia House was relevant to his claim of unjust enrichment against Mr Dunne and Ms Killilea.

The couple rejected this allegation.

The judge in his ruling said that the trustee should be prepared to establish that there is a genuine basis to conclude any evidence concerning Belgravia would be a sufficient to make a claim for “a constructive trust” over the property for Mr Dunne’s creditors, a remedy designed to prevent “unjust enrichment”.

Ms Killilea (44) did not respond to questions about why she sold the property.

She acquired Belgravia House on Bishopsgate Road in Englefield Green in Surrey for a reported €4.45 million, or £3.925 million with planning permission to replace the existing house with a 15,712sq ft modern mansion complete with a leisure centre in the basement and staff accommodation.

The former newspaper columnist, who is married to but legally separated from Mr Dunne, ultimately opted against building on planning permission for a larger residence.

Historic aerial imagery of the property indicates that Ms Killilea carried out various improvements to the grounds of the property, including the installation of a tennis court and putting green along with the construction of a gate lodge.

An investment vehicle named Lonsyd was used to acquire the property around October 2014, with financing secured from Lancashire Mortgage Corporation, according to company documents.

While reports emerged in 2017 that Ms Killilea was residing at Belgravia House, there were no evident links between her and Lonsyd at that time.

But earlier this year – shortly before the sale of Belgravia House – Ms Killilea assumed ownership and control of the company, joining the board of directors and confirming to the UK Companies House that she directly or indirectly holds 75 per cent or more of the company’s shares.

Ms Killilea is referred to as “Ms Gayle Dunne” in all documents.

The document confirming Ms Killilea’s ownership of the company was lodged almost two weeks before it repaid all of its loans to Lancashire Mortgage Corporation in February of this year, when the property was sold for €10.2 million to Mr Candy.

He plans to replace them with a modest 292sq m (3,143sq ft) single-storey house, designed in a neoclassical style, along with a small cottage and detached garage.

It is believed that Mr Candy acquired the property in order to further expand his expansive estate, named Cheval Manor, which incorporates about five houses and is situated directly next door to the property acquired from Ms Killilea.