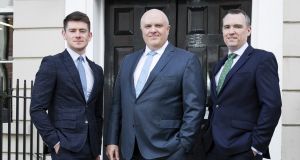 Savills has moved to bolster its office team in Dublin with the appointment of Sean Ryan McCaffrey and Niall Cuddy.

Ryan McCaffrey joins Savills as senior surveyor in the offices department, focusing on office leasing, site acquisition, design and development. A chartered surveyor, he joins from JLL where he worked for three years in valuation advisory, covering multiple sectors and providing investment valuation appraisals to leading national and international funds.

Ryan McCaffrey completed the MSc in Real Estate in Ulster University, graduating with a first-class honours degree and receiving the Real Estate Excellence Award for the highest average marks.

Cuddy joins Savills as an associate director, having previously worked for CBRE’s office occupier team in the London commercial property market. While in London, he represented some of the city’s largest occupiers including Google, HP, HSBC, Telefonica, Scottish Power and Universal Music.

Commenting on the appointments, Savills head of offices, Andrew Cunningham said: “The office team engage from acquisition all the way through design, development and leasing and occupation until sale or refinance for holding. They have invested heavily in people, which is key, but also in information platforms and building research to assist clients in taking longer-term, strategic views on the market. That ensures client buildings are future proofed and flexible. These appointments reinforce that philosophy.”