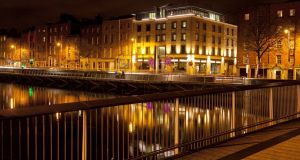 The Dublin hotel market is showing the first, albeit tentative, sign that it’s emerging from its near year-long Covid-19 lockdown.

Having offered the luxury Morrison Hotel for sale at a guide price of €80 million on the eve of then taoiseach Leo Varadkar’s fateful address to the nation from Washington DC on March 12th last, agent CBRE is understood to be assessing interest from prospective purchasers at a reduced guide price of €68 million.

While a sale at that level would represent a discount of 15 per cent on the figure sought originally, it would still deliver a significant profit for the hotel’s owner, Russia’s richest woman Yelena Baturina, on her original investment.

Having acquired the Morrison from Nama for €22 million in 2012, Ms Baturina is believed to have spent up to €10 million on a refurbishment of the hotel overseen by NODA Architects between 2012 and 2013.

Developed originally in 1996 by the late publican Hugh O’Regan, the Morrison Hotel occupies a prime city centre location overlooking the river Liffey, within walking distance of Temple Bar, the shopping areas of Henry Street and Grafton Street, and the IFSC.

Designed originally by Douglas Wallace Architects, the boutique property comprises 145 guest rooms and suites, seven meeting and events facilities capable of accommodating up to 240 guests, as well as a state-of-the-art fitness centre.

The Morrison’s accommodation is complemented by a range of bar and restaurant facilities, including Halo Restaurant, Quay 14 Bar and the Morrison Grill. It trades under the Hilton Worldwide group’s DoubleTree brand.

The Morrison is being sold subject to a franchise, offering operational flexibility for a new owner. There is also potential, according to the selling agent, to enhance the facilities, with scope for further development through the acquisition of adjoining properties.

Ms Baturina’s pre-pandemic decision to sell the Morrison Hotel followed a particularly strong year at the upper end of the Dublin hotel market.

A one-time construction magnate in Russia, Ms Baturina was married to the late Yury Luzkhkov, who was the mayor of Moscow for many years until 2010.

Her other assets include European renewable energy facilities, as well as hotels in Russia and Austria. According to Forbes she is worth $1.3 billion (€1.07bn).

5 US removes stumbling block to global deal on digital tax

6 Venture capital in need of funds

7 UK food group in deal with Joyces of Galway