Rents in retail sector to increase 6% this year, office rent to rise 5% 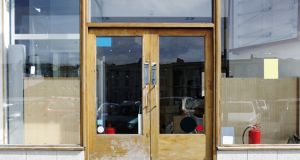 Retail space rents are to rise 5 per cent this year, according to a survey. Photograph: iStock

Prime retail rents in Dublin are expected to rise by 6 per cent this year, despite the impact online shopping is having on the sector, a survey has found.

While growth of retail rents continues at pace, the growth in Dublin office rents is due to slow with rents rising by 5 per cent this year, a report from the Society of Chartered Surveyors Ireland shows.

The report finds more than half of Ireland’s surveyors see online shopping as one of the most important issue facing the retail market. Some 35 per cent of respondents ranked it as the top issue.

The report singles out Munster as the region in which commercial rents are expected to grow the strongest this year. James Mulhall, managing director of Murphy Mulhall, said that while there were signs the recovery was gaining pace in Munster, particularly in Cork city centre, the widening divergence between Dublin and the rest of the country was an issue which needed to be addressed.

“At the other end of the scale, Sligo, where the Government recently announced the National Development Plan, has the highest commercial vacancy rates in the country of 19 per cent.

“With current rent levels in Dublin heading back towards 2007 levels, we need Cork, Galway, and other cities to provide viable alternatives for sustainability in the overall commercial property market,” Mr Mulhall said.

The survey also questioned the attitude of surveyors to Brexit, and while they’re slightly more optimistic on the whole, that’s dependent on location. Almost four in 10 surveyors see the UK’s decision to leave the EU as having a positive effect on business activity in Dublin, but that falls to 9 per cent in the rest of Leinster and zero per cent in Connacht and Ulster.

Shortages of suitable property, the rise of online shopping and the effects that the rising costs of housing may have on business relocation decisions are also concerns.

The report is relatively positive on the industrial and logistics sector with all regions recording an increase in demand last year. However, potential growth is hampered by a lack of modern warehouse space, the report notes. That shortage is keenly felt in Connacht and Ulster where 75 per cent of surveyors expect supply to be less than demand for prime industrial space.

“The changing face of retail and its knock-on effects into logistics will significantly impact the industrial sector, with the prospect of new and expanding distribution and delivery centres throughout Ireland,” Mr Mulhall said.

“If there is continued uncertainty regarding the movement of goods from the UK following its departure from the EU, there will be increased demand also arising from this. Therefore, it’s essential that there are suitable modern logistic facilities available if we are to take full advantage of these situations,” he concluded.