Microsoft closes in on deal for new Dublin docklands offices 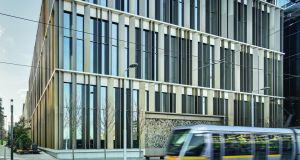 Microsoft is set to expand its Irish operations further with a planned move into new offices in the Dublin docklands.

The US-headquartered software giant is understood to be closing in on an agreement to rent up to 47,000sq ft of space at No 3 Dublin Landings from Irish property company, Iput.

The proposed deal will give Microsoft the capacity to grow its existing 1,800-strong Irish-based workforce by an additional 400 workers.

While the news of Microsoft’s expansion will be widely welcomed, coming as it does in the midst of the Covid-19 economic shock, the company’s intention to locate in No 3 Dublin Landings represents a particular coup for the building’s owners.

Having acquired the property last January from its developers, Ballymore and Oxley, for €115 million, Iput offered it to the letting market through joint agents Knight Frank and CBRE just two days before Taoiseach Leo Varadkar announced the Government’s introduction of the current Covid-19 restrictions.

The Irish Times understands Microsoft will occupy offices comprising up to 47,000sq ft of space on the lower ground, ground and first floors at No 3 Dublin Landings, leaving a further 72,000sq ft available across the five remaining floors to other prospective tenants.

Asked for comment on the matter, a spokesman for Iput said: “Iput is in discussions with a number of prospective tenants in respect of No 3 Dublin Landings. When we have a letting to announce we will do so.”

Located immediately next to the respective headquarters of the Central Bank and the National Treasury Management Agency on the Dublin Landings campus, No 3 is a grade A headquarter office building.

The property has a BER A3 rating and is on target to achieve LEED Platinum certification, which is line with Iput’s sustainable investment strategy. During 2019, it was the first Irish property company to sign the UN principles for responsible investment.

Number 3 and the wider Dublin Landings development is well-located within the context of the city’s thriving docklands area. The newly-opened Mayson Hotel neighbours the scheme, while the Gibson Hotel, Point Square and the 3 Arena are all within a five-minute walk.

The IFSC, the Convention Centre Dublin and the Samuel Beckett Bridge, leading to Dublin’s south docks, are a 10-minute walk away. Salesforce’s new European headquarters, meanwhile, is being developed currently by Ronan Group Real Estate on the adjacent site.

Number 3 is just one of five commercial buildings Ballymore and its Singapore-headquartered partners Oxley developed as part of the Dublin Landings campus. Overall, the scheme extends to 1m sq ft of offices, residential and retail space. All four of the other commercial buildings have been sold, as have the 298 apartments which are due to be delivered between November 2019 and later this year.

The north docklands scheme has proven to be a lucrative undertaking for both its developers and for the National Asset Management Agency. In a recent announcement to the Singapore stock exchange, Oxley said the development and sale of the commercial and residential buildings at Dublin Landings had generated €745.4 million.

While the Oxley group is entitled to some €591.5 million of that total, Nama subsidiary National Asset North Quays DAC received the balance of €153.9 million.