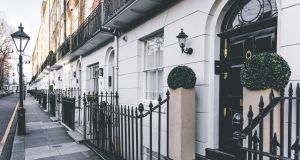 Landlords in London’s hotspots, such as Mayfair and Knightsbridge, have been forced to slash their rents or see their properties stay unoccupied. Photograph: iStock

Homes in the most expensive areas of the capital are sitting empty for more than two months before finding tenants, the longest waiting period since the last financial crisis, according to property data company LonRes. And that’s despite rents recently plummeting at the fastest annual pace in a decade.

An exodus of office workers and dearth of global visitors has hammered swanky hotspots such as Mayfair and Knightsbridge, forcing landlords to slash their rents or see their properties stay unoccupied. The number of luxury pads up for rent in central London has surged by 75 per cent from a year earlier.

For owners of the multimillion pound homes, it could be a long winter. Restrictions that resumed or tightened in the latest national lockdown which started this month are likely to keep a ceiling on rents for some time yet.

“It’s probably going to be another few months of accepting lower rents than maybe you’ve historically got,” said Marcus Dixon, head of research at LonRes. “It’s just about the need for landlords to ride this out.”

As the government races to vaccinate the population against the virus and set the country on a path back toward something resembling normality, Mr Dixon is hopeful that a recovery remains in sight.

As tenancies expired last year and the pandemic kept new residents away, a flood of vacant homes came onto the market. Landlords have also struggled to fill short-term rental properties popular with tourists as well as those aimed at international students, workers and visitors. That doesn’t look set to improve any time soon, with the government closing all travel corridors this week.

London luxury rents are seeing the biggest annual slides since the aftermath of the financial crisis, plummeting more than 14 per cent across the capital in December compared with a year earlier. It’s not only the city centre that’s suffering; the outskirts are seeing the steepest falls as wealthy tenants choose to live even further afield than the suburbs, according to Mr Dixon.

It’s a good time to negotiate. Tenants looking to live in London’s poshest homes are knocking off almost triple the discount they were snagging before the pandemic, with more than half of renters managing to beat down the price. “Landlords obviously want to try to limit voids as much as they can,” said Mr Dixon. “But the reality of the current situation is there’s not been as many tenants around, and those tenants can be more picky.”

Sellers aren’t faring much better than landlords. Before coronavirus struck London, the sales market briefly enjoyed two quarters of growth before prices slumped, continuing an overall decline that’s been playing out for years. On recovery prospects, the jury is still out; LonRes points to the market’s resilience just prior to the outbreak as one reason to be bullish. – Bloomberg