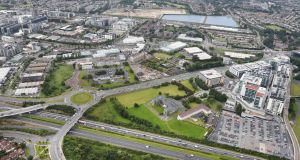 The Legionaries of Christ is set to secure about €23 million from the sale of 2.6 hectares (6.5 acres) of lands attached to their home and St Michael’s School at Sandyford in south Dublin.

The site is understood to have been sold in an off-market transaction to Vanguard Global Realty, with Irish property veteran Tom Hamilton, in place as local CEO.

While it is understood the proceeds of the sale will contribute to the redevelopment of the Legionaries of Christ’s existing facilities on the remaining 1.4 hectares (3.5 acres) of its Sandyford lands, and on a new school for St Michael’s House, the portion of the site acquired by Vanguard is expected to be redeveloped as offices, in line with its zoning for “office and enterprise” use under the Dún Laoghaire Rathdown County Development Plan 2016-2020.

The subject site occupies a prime position on Leopardstown Road, and within the area now known as the Sandyford Business District. The property overlooks the hugely-successful Central Park office campus and has the benefit of direct access to the Central Park Luas green line stop.

The Legionaries of Christ were advised on the transaction by Michele Jackson of TWM while Des Lennon of JLL acted for Vanguard. Both parties declined to comment on the matter when contacted by The Irish Times.

The sale of the 6.5 acre site is understood to have been prompted by the Legion’s urgent need to fund its new facilities and a new school. St Michael’s House Grosvenor School is a special school for children with moderate, severe and profound learning difficulties, including children with autism. The school’s mission is to promote the optimum social, educational and personal development of its pupils.