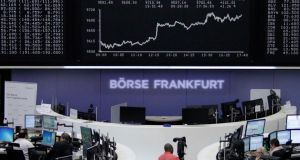 The curve of the German share price index DAX board is pictured at the Frankfurt stock exchange. Photograph: Reuters/Fabrizio Bensch

A boost for mining companies and Sky Deutschland helped drive European stocks rose to their highest level in more than six years. Commodity producers jumped the most in almost seven months as JPMorgan Chase recommended buying shares in miners on signs of a recovery in Chinese demand.

Sky Deutschland increased the most in more than two years after British Sky Broadcasting said that it was in talks to buy the company.

Packaging group Smurfit Kappa also put in a strong performance, adding 1.79 per cent to close at €17.305 on volumes of just over 1.13 million shares.

Listed bookmaker Paddy Power, which holds its agm in Dublin today, slipped 1.09 per cent to €59.25.


LONDON
BHP Billiton climbed 2.7 per cent to 1,948 pence, Rio Tinto was up 4.8 per cent to 3,340p and Anglo American rose 2.3 per cent to 1,641.5p, ranking them among the best performers in a group of mining companies that advanced on the back of JP Morgan’s recommendations. Copper and base metal prices also rose.

BSkyB fell 2.4 per cent to 868.5p after confirming that it is in talks to buy Sky Deutschland.

Anite surged 10 per cent to 91.5p, its biggest rally in 2½ years. The maker of software for testing mobile devices forecast that full-year revenue and operating profit will be in line with expectations. The Sunday Telegraph reported that the company had begun exclusive talks to sell its travel business to LDC, the private-equity division of Lloyds Banking Group.

Gem Diamonds advanced 1.5 per cent to 171p. The London-based diamond producer extracted 39 per cent more carats at its Letseng mine in Lesotho in the first quarter than it did a year earlier. The company also said it sold more than 30,000 carats in the quarter, up 4 per cent from last year.


EUROPE
Sky Deutschland, controlled by Rupert Murdoch’s 21st Century Fox, soared 9.9 per cent to €6.97. Murdoch, who owns about 39 per cent of BSkyB, is working on a transaction valued at about €10 billion to combine BSkyB with his holdings in Germany and Italy, according to sources close to the matter.

Logitech, the world’s biggest maker of computer mice, advanced 6.8 per cent to 11.85 Swiss francs. Credit Suisse raised its rating on the stock to outperform from neutral, after the shares fell more than 20 per cent from a February 12th high.

Alstom rose 2.8 per cent to €29.02. Siemens, which is vying with General Electric for Alstom’s energy assets, may offer to transfer its rail-signalling unit to Alstom Transport as part of an improved bid, Les Echos reported.


NEW YORK
Internet and biotech names were among the strongest advancers in the early part of the day. Biogen Idec gained 4 per cent to $298.12 while TripAdvisor shot up 6.5 per cent to $90.07. Both sectors have been wildly volatile in recent sessions, moving on concerns over valuation and hopes for high levels of growth.

Tesaro surged 18 per cent to $28.33 after the company said its experimental drug to prevent chemotherapy-induced nausea and vomiting met the main goal in a third late-stage trial. – Additional reporting: Bloomberg, Reuters

1 Lockdown exit: How can Irish economy reopen without big health risks?
2 Finance ministers gather as fears grow even the future of the euro zone is at risk
3 I want to change my will quickly in case I fall ill. Do I need a lawyer?
4 Property market has not felt full impact of Covid-19, warns Sherry FitzGerald
5 Coronavirus: How Covid-19 may reshape the Irish retail landscape
6 Government announces €1bn in supports for businesses
7 Iseq 20 companies lose €34bn in value due to pandemic
8 Facing economic meltdown ... and nothing wrong with our economy
9 Coronavirus: Property rental in the jaws of the epidemic
10 MCD’s Desmond ‘optimistic’ that Electric Picnic 2020 will go ahead
Real news has value SUBSCRIBE