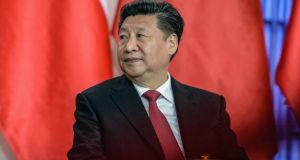 China has condemned the Panama Papers investigation as a Western conspiracy and its censors have restricted access to coverage of the leaked documents, which show offshore dealings by the families of president Xi Jinping (above) and other Communist Party leaders. Photograph: Filip Singer/EPA

China has condemned the Panama Papers investigation as a Western conspiracy and its censors have restricted access to coverage of the leaked documents, which show offshore dealings by the families of president Xi Jinping and other Communist Party leaders.

“The Western media has taken control of the interpretation each time there has been such a document dump, and Washington has demonstrated particular influence in it,” the Global Times, an influential tabloid published by the same group that publishes the Communist Party organ, People’s Daily, said in an editorial.

Members of The International Consortium of Investigative Journalists, which includes The Irish Times, have spent more than a year examining a cache of 11.5 million documents and records from Panama-based Mossack Fonseca, one the biggest providers of offshore services to individuals, companies and middle men who advise them.

“Information that is negative to the US can always be minimised, while exposure of non-Western leaders, such as Putin, can get extra spin,” the Global Times editorial said.

State media in China makes no mention of the reports of the offshore dealings of the Party elite, and the news is being censored on Chinese social media outlets.

No evidence has ever emerged making a direct link between Mr Xi and illegal business dealings, and like most of the senior leadership, he would have been ring-fenced from any commercial dealings years before he began his ascent to the top leadership.

Mr Xi has also orchestrated a vast anti-corruption campaign in China, which has punished over 300,000 party officials for graft and abuse of power.

However, the families of powerful leaders often show up in searches through company files and documents. In 2012, Bloomberg ran a report linking Mr Xi’s family to lucrative business holdings, but it did not mention offshore accounts, and it was also not reported in China.

The Global Times editorial did not mention the links between the communist elite and offshore accounts but focused instead of the links shown between a close ally of Russian president Vladimir Putin and offshore funds.

“In the Internet era, disinformation poses no major risks to Western influential elites or the West. In the long-run, it will become a new means for the ideology-allied Western nations to strike a blow to non-Western political elites and key organisations,” the Global Times said.

The documents also list the French architect Patrick Henri Devillers, who was linked to disgraced former Party star Bo Xilai through his business dealings with Mr Bo’s wife Bo Guagua, who was jailed for her part in the murder of British businessman Neil Heywood.