Businesses look outside Ireland for insurance as premiums spiral

Rising costs an ‘existential threat’, as 45% of respondents say they threaten their business 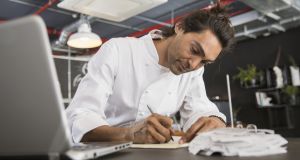 Irish businesses have begun looking outside the State for more affordable insurance premiums as the spiralling price of cover becomes an increasingly existential threat, a report launched today claims.

Insurance costs are just one major challenge identified alongside burdensome commercial rates, the financial implications of crime and difficulty accessing finance and banking services, among others.

The Cost of Doing Business report has been compiled by the Oireachtas Business Committee following meetings with 30 representative organisations between last October and May.

Unsurprisingly, the rising cost of insurance captured a significant portion of its attention – the issue identified by one contributor as a “societal threat” undermining the functions of businesses, charities and voluntary groups.

According to RGDATA, the retail grocery lobby, a typical shop’s insurance policy has increased from less than €10,000 a few years ago to as much as €100,000 today.

Restaurants have seen insurance premium increases of 45 per cent, a level the Restaurant Association of Ireland deems “unsustainable”. The Institute of Professional Auctioneers and Valuers told the Committee that public liability, employer liability and motor insurance have been increasing by 18-20 per cent per year.

Concerns around rising insurance costs are nothing, new but the committee’s report gives an overarching view of how they are affecting Irish business across the board.

In a survey from last January submitted to the committee, the Alliance for Insurance Reform found one-fifth of respondents had seen premiums rise by over 70 per cent. Almost half experienced rises of more than 30 per cent and, “starkly”, 45 per cent believe the costs are a threat to their organisation.

“The increases in premiums also led to organisations and businesses looking for alternative sources of insurance cover,” the report notes.

“Both the RAI and CSNA [Convenience Stores and Newsagents Association] stated they were looking to insurance companies outside the jurisdiction to find more affordable premiums for their members.”

Kevin Thompson of Insurance Ireland, the industry umbrella group, told the committee the cost of claims was the driving factor in setting premiums.

In particular it pointed to the level of awards in personal injury cases. According to the Courts Service there was a 15 per cent increase in the number of personal injury suits filed in 2016 over 2015.

Mr Thompson, quoting the data, said the average Circuit Court award had increased by 48 per cent between 2013 and 2016. When cases proceeded away from the Personal Injury Assessment Board and into litigation, legal fees added a substantial additional cost layer, all of which contributed to premium rises.

The committee has recommended that where court awards surpass those levels set in the Book of Quantum – a guide for standard insurance payouts – the judge should have to explain why.

Its report also details concerns around an ongoing process to re-evaluate commercial rates, a major drain on company finances.

Companies are frustrated at a perceived reduction in retail banking services, while crime has also played a central role in business costs.

RGDATA said 97 per cent of its members had been a victim of crime in the last year, with 88 per cent experiencing shoplifting.

1 How long can Government afford to keep State pension age at 66?
2 How much will a Covid-19 vaccine cost?
3 Guinness brings out a non-alcoholic version of the black stuff
4 Frank Fitzgibbon stepping down as Sunday Times editor
5 How on earth do we the calculate the cost of Level 5 for the Irish economy?
6 Farm lobby seeks EU ban on vegan ‘burger’ and veggie ‘sausage’
7 Irish start-up Wayflyer raises €7.8m in seed funding
8 Google's incredible power is the result of decades of regulatory failure
9 Paul Coulson plans record $1.8bn Ardagh investment
10 Budget 2021: fuel prices rise and high-emission cars hit
Real news has value SUBSCRIBE