At the intersection of food and medical science, cultured meat produced in cell culture is slowly moving into the mainstream 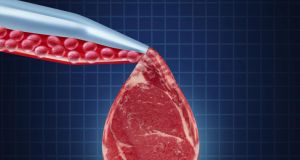 Flavour is still proving tricky with meat produced in vitro, but some commentators joke that cultured meat still tastes better than many vegan options currently on the market

You could start a fast food joint with the amount of grub that is being made from cell culture in a lab.

Burgers and eggs have already been successfully developed and chicken is next on the menu.

Cultured meat is meat produced in vitro, in a cell culture, rather than from an animal. Cells are taken from a cow, pig, chicken or whatever, and reproduced in a nutrient-rich sauce.

Once they have multiplied enough, they are attached to a spongy frame, usually made from something like soy protein.

They can be stretched and shaped, seasoned and cooked to make all manner of boneless, processed meats such as sausages, chicken nuggets or hamburgers.

Flavour is still proving tricky, but some commentators joke that cultured meat still tastes better than many vegan options currently on the market.

The technology already exists. Finding the expertise is the tricky part.

“This is a very new area so while there is lots of enthusiasm, it is difficult to find people who are already passionate about this work,” says Isha Datar, CEO and president of New Harvest, a non-profit organisation working to promote breakthroughs in animal products made without animals.

“No one is currently funding this kind of research, mainly because it is at the intersection of food and medical science,” she adds.

“We spent most of 2015 trying to raise funds so that we could finance more early-stage research. All the expertise comes from medical science, predominantly from scientists trying to grow organs for organ transplant. But the application is in food.”

The research that lead to the beef cell cultured hamburger was funded by Sergey Brin, co-founder of Google, and made the news worldwide back in 2013.

“It’s definitely not a veggie burger,” says Datar. “The first prototype was made with muscle cells and, while not tasting great, still tastes better than a lot of vegan meat substitutes I’ve tried.”

Elsewhere, research into chicken made from cell culture is being funded at Tel Aviv University in Israel. Biomedical engineer Amit Gefen is tasked with what many consider to be a more difficult project than the aforementioned “test tube” burger. While a burger requires gathering and shaping many small fibres of cow muscle into one larger piece of meat, Gefen aims to synthesise a whole chicken breast. Why chicken?

It makes up one third of the world’s total meat consumption and the breast is by far the most popular part.

“The cultured chicken project is a feasibility study funded by the Modern Agriculture Foundation [MAF] based in Israel,” explains Shir Friedman from MAF.

“The aim of the foundation is to support cultured meat research in any way possible to hopefully replace primitive meat production as we know it today. This will not only eliminate animal suffering but also help save the planet since current meat production is the number one most harmful human activity for the environment.”

“One third of all ice-free land is dedicated to animal production, and 18 per cent of all greenhouse gas emissions come from animal agriculture,” says Datar. “It should be at top of our priority list if we want to slow down climate change.”

In addition to the impact on climate, modern farming practices do not always make good economic sense. Cows, for example, are a very inefficient source of protein.

According to physiologist Dr Mark Post from Maastricht University, who led the “test tube” burger team back in 2013, a cow requires 100g of vegetable protein to produce only 15g of edible animal protein.

Assuming taste and texture can be successfully synthesised for chicken or beef or anything else, the process of synthesising meat from meat culture itself may prove difficult for some people to stomach.

Supporters argue there is nothing that extraordinary about it. “Cultured meat couldn’t be described as unnatural,” says Datar. “It is produced the same way bread, cheese, yogurt, and wine are also made.”

Others argue cultured meat production is less unnatural than current farming practises where, in many instances, animals are raised in confined spaces, injected with hormones, and fed diets full of antibiotics and animal wastes.

There is also the possibility that a cultured burger might never prove to be a convincing substitute for a real quarter pounder. It may become an alternative food source alongside meat products. “Cultured meat might never be the same as regular meat,” says Datar. “So prior expectations are not necessarily going to be valid.”