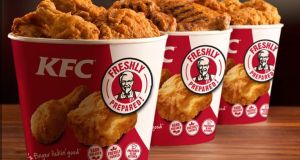 One of the most popular fast food chains in China is the fried chicken restaurant KFC – the stores are ubiquitous and generally packed wherever you go.

It’s a very powerful brand, so it’s not surprising that Yum! Brands, which also owns Taco Bell and Pizza Hut, is suing three Chinese firms for using social media to spread rumours, including that its chickens were genetically modified to have six wings and eight legs.

KFC opened in 1987 in China and by the end of 2014 it had 4,828 branches there. Over the years it has had to deal with a few food scares – in 2013, the state broadcaster CCTV alleged that local suppliers had fed excess antibiotics and hormones to chickens supplied to KFC. But the latest rumours have angered Yum! and in a case in Shanghai, it is seeking an apology and 1.5 million yuan (€220,000) compensation.

The rumours allegedly appeared in posts on the wildly popular WeChat app and were subsequently spread through at least 4,000 posts.