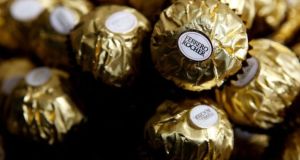 The deal is the first by family-owned Ferrero International since the death earlier this year of patriarch Michele Ferrero, who was Italy’s wealthiest man and largely shied away from acquisitions as he built up a business that also spans Kinder Surprise eggs and Tic Tac mints.

Ferrero said on Monday it would pay 145 pence a share in cash for the 104-year-old Thorntons, a 43 per cent premium to the British firm’s closing stock price on Friday.

Thorntons has been hit in recent years by the rise of newer and upmarket brands such as Green & Black’s and Hotel Chocolate. It has had some success by shifting to sell more of its chocolates through third parties while closing some of its own stores, but after a profit warning in December its chief executive of four years, Jonathan Hart, is stepping down.

Thorntons shares, which had lost around 40 per cent since March 2014, jumped to touch the offer price.

Analysts said Thorntons was a good fit for Ferrero, which has strong, premium brands but no retail platform to showcase them.

The death of its patriarch had sparked speculation Ferrero might be a takeover target for rivals such as Mars, Mondelez International, Nestle or Hershey.