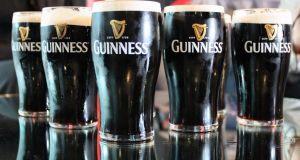 Guinness-maker Diageo reported a bigger-than-expected decline in underlying net sales on Tuesday as demand for its whiskeys, vodka and gin fell in all markets except North America.

The drinks group reported an 8.4 per cent drop in organic sales for the year ended June 30th, wider than the 7.3 per cent fall analysts had expected, according to company supplied estimates.

This marks the company’s worst annual sales performance in more than a decade, according to Bernstein analysts.

By region, organic sales in Asia declined the most, falling 16 per cent due to the impact of coronavirus-related closures of alcohol outlets and pubs in India and Thailand, while in China the lack of the key Chinese New Year drinking period hit demand.

The company’s Latin America, Africa and Europe and Turkey markets also posted double-digit declines in sales, mainly due to disruptions to supply chain and fewer social drinking occasions due to the pandemic.

North America was the only bright spot, with sales rising 2 per cent, reflecting strong demand for tequilas and ready-to-drink beverages at supermarkets and alcohol stores, the company said.

“The outbreak of Covid-19 presented significant challenges for our business, impacting the full year performance,” chief executive Ivan Menezes said in a statement.

The company, which also makes Tanqueray Gin and Smirnoff Vodka as well as a wide range of scotch whiskeys, said it was still unable to provide specific outlook for the year, after abandoning its full-year forecast in April. – Reuters