Near 40 per cent decline in prices has also reduced annual incomes by up to €35,000 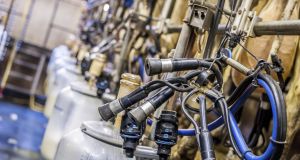 Milk supply: A glut in production, a slowdown in Chinese demand and Russia’s trade embargo have combined to create the worst dairy market slump in a decade. Photograph: Thinkstock

More than €800 million has been wiped off the value of Ireland’s dairy sector due to collapsing milk prices over the past two years.

The Irish Creamery Milk Suppliers Association (ICMSA) says the near 40 per cent fall in prices since 2014 has also reduced annual incomes by up to €35,000. It bases its calculation on figures from the Central Statistics Office.

Futures trading suggests there will be another drop in prices at this week’s Global Dairy Trade auction, which sets the main international reference price, with key wholemilk prices expected to be down by as much as 10 per cent.

A glut in production, a slowdown in Chinese demand and Russia’s trade embargo have combined to create the worst dairy market slump in a decade.

The average price paid to Irish dairy farmers has fallen from 38 cent a litre in 2014 to a current rate of 24-26 cent a litre. With the cost of production in Ireland put at 25 cent a litre before labour costs, many farmers are now only breaking even on the milk they sell.

He also suggested the actual impact of this income loss on rural areas, based on the multiplier effect of farm incomes, is estimated to be €1.35 billion.

“And yet we struggle to hear even a word on this crisis while we have endless discussions about the exact size of the fiscal space available for tax cuts that will only be slightly greater than the amount we’ve lost as a result of a falling milk price.”