Dave Hannigan’s America at Large: John Daly the latest to row in behind presidential candidate 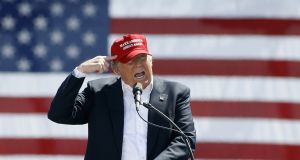 It is ordinarily around this time that John Daly generates his annual smidgen of media coverage when he hauls his RV into a Hooters’ parking lot just up Washington Road from Augusta National and starts hawking merchandise out the back of it. The hilarious juxtaposition of the game’s most uncouth character and its toniest golf club always makes for good copy even if it’s now a decade since he last actually teed it up at The Masters. This year, Daly emerged into the spring spotlight earlier than usual and for a different reason.

“That’s y I luv my friend @realDonaldTrump he’s not politics he’s business! It’s what our country needs #SuperTuesday,” tweeted Daly the other week.

The Republican frontrunner got yet another grammatically-challenged endorsement and an almost forgotten golfer gained a fleeting modicum of relevance. Of course, Daly isn’t the first and won’t be the last sportsman (no notable sportswomen yet, surprisingly enough) to voice their support for Trump’s candidacy. The list of those who have already done so is long and strange, and includes a handful of alumni from his reality television show. All those in favour seem to strike similar notes about his strengths.

“I think that he has the fire in his belly to make America great again and probably do it the right way,” said Mike Ditka, coach of the 1986 Super Bowl-winning Chicago Bears and now a respected NFL analyst.

Mike Tyson was equally sanguine about what this man might achieve in the White House. “If you want to get this city out of a dump, better vote on Trump. Okay?” said the former heavyweight champion on a New York news show. “He’s an underdog and no one likes the fact that he is winning. I know Trump. This is a good thing. Vote on Trump.”

Although many of his sporting supporters are, like NFL greats Herschel Walker, Matt Light and Terrell Owens, New York Yankee right-fielder Paul O’Neill, Atlanta Braves’ pitcher John Rocker and one-time Knicks’ stalwart Latrell Sprewell, retired, there are current players in his corner too. These include the Buffalo Bills’ Richie Incognito and the Boston Red Sox pitcher Clay Buchholz.

Not to mention the New England Patriots’ Tom Brady who infamously had a “Make America Great Again” hat in his locker and then lauded Trump as a person and a businessman, before stopping just short of calling for people to vote for him.

It would be easy to dismiss many of the athletes past and present who have backed Trump as a motley crew of some of the more out-there personalities from the various arenas. To do that would be to make the same mistake everybody has made since his campaign began amid a welter of late night comedy one-liners and a general air of hilarity. The jokes aren’t funny anymore and, if his rise has taught us anything, it’s that nobody needs to underestimate the power of celebrity in American politics ever again.

There is a reason that each election season desperate candidates seek out the imprimatur of men and women of unique athletic ability. Between Richard Nixon courting and securing the approval of baseball pioneer Jackie Robinson back in 1960 (he preferred Tricky Dicky’s grasp of racial issues to JFK’s apparently) to Hillary Clinton bringing Billie Jean King and soccer star Abby Wambach out on the stump this year, rubbing shoulders with heroic figures has always proved a smart vote-getting strategy. This nation remains in thrall to the old adage, “If I touch a star, I may twinkle too”.

What is astonishing about the roster of questionable characters speaking out on Trump’s behalf is the kind of stuff some of them have in common. Tyson is a convicted rapist. Daly has domestic violence charges on his resume. Rodman paid six-figure damages in civil court to a woman who accused him of rape. Incognito was involved in one of the worst bullying episodes in recent NFL history. Any other serious candidacy might eschew this kind of support for fear of alienating potential voters. Not this one. Not this year.

Although there are increasing calls for more of sport’s silent majority to stand up against Trump and the divisiveness he embodies, it is telling too how little blowback his boosters have received. This may be because wealthy athletes have always skewed Republican or it could be down to the fact nobody puts too much store in the views of fallen idols who have become, literally in Tyson’s case, cartoon characters.

“I’m not supporting him for all of his views, or his immigration views,” said France. “I happen to be very enamoured by the excitement he’s brought and the voter turnout that it is creating.”

He probably also hopes Trump will make the trains run on time.