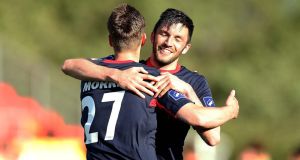 A terrific save from Conor O’Malley in the penalty shootout proved the deciding factor in putting St. Patrick’s Athletic through to their first League Cup final since 2003.

O’Malley made the crucial stop when diving to his left to parry away Mikey Drennan’s third Rovers’ penalty before David O’Connor shot their fourth against a post.

Killian Brennan also missed for St. Patrick’s, though Aaron Greene, Conan Byrne, James Chambers and Ian Morris subsequently scored to see the Inchicore side through to the September 19th final.

Though Rovers enjoyed good early possession, with clear chances to score through Cian Kavanagh and Marty Waters, they had goalkeeper Barry Murphy, and the frame of his goal, to thank for not conceding during an eventful first half.

First called into action on 12 minutes, Murphy got a finger tip to touch Chris Forrester’s curling shot onto the crossbar.

Murphy then sprung full stretch to his right to push Brennan’s free kick round a post before Lee Desmond saw his header come back of the Rovers bar on 32 minutes.

Rovers regained the initiative in the final minutes of the half, hitting the woodwork twice themselves.

It was the 75th minute before a further chance of note arrived; Rovers’ Max Blanchard just not getting enough of a touch to turn home Gary McCabe’s free kick.

Drennan was close to preventing extra-time when firing narrowly wide in the 91st minute after combining with substitute Danny North.

St. Pat’s shaded matters in extra-time with Chambers having a shot deflected for a corner off the legs of Murphy before Rovers defender O’Connor cleared off the line from Byrne.

1 CVC cuts Six Nations offer by half to €165m as talks continue on new deal
2 Jack Charlton era made GAA sit up and realise its greatest strength
3 Game Changers: Living beyond fear puts Alex Honnold above all others
4 Alain Rolland to step down from World Rugby position
5 Georgia and Fiji in line to join Six Nations sides in eight-team tournament
Real news has value SUBSCRIBE