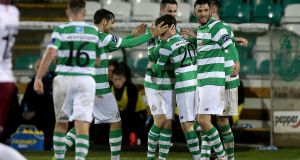 Shamrock Rovers secured their fourth league win of the year when overcoming Galway United by 2-0 at Tallaght Stadium on Friday night.

The hosts started in an impressive manner with Pat Cregg firing wide from Simon Madden’s low cross in the sixth minute before Gavin Brennan headed wide from Killian Brennan’s free-kick a minute later.

However, some lax Galway defending was eventually punished in the eighth minute as Brandon Miele was afforded too much time and space to fire a crisp low finish past Kevin Horgan from twenty yards.

Rovers continued to impress going forward but they were indented to David O’Connor in the 19th minute as he worked wonders in blocking Cunningham’s goal-bound shot after a clever pull-back by Gary Shanahan.

O’Connor proved a threat at the opposite end in the 25th minute as he saw his close range header from Miele’s corner kick deflected into the grateful arms of Horgan.

From the resultant counter-attack, Galway threatened to restore parity as another Shanahan break down the right culminated in a volleyed strike by Vinny Faherty that was inches over Barry Murphy’s crossbar.

The hosts should have doubled their lead in the 43rd minute with Miele once again heavily involved with a pin-point cross that Michael Drennan mistimed terribly, heading wide from six yards when unmarked.

The second half resumed with the hosts intent on doubling their lead as Gary McCabe and Clarke enjoyed enterprising but ultimately fruitless raids inside the first three minutes of the restart.

However, defensive uncertainty almost proved their undoing on the hour mark as Shanahan was allowed to sneak in behind the back four with his arced header striking Murphy’s crossbar before being cleared to safety.

Far from building on that opportunity, the visitors lost fluency from that juncture with both centre-forwards replaced as manager Tommy Dunne looked to re-energise his attack.

That switch should have worked wonders in the 78th minute with Shanahan delivering a sublime delivery from the right that substitute Ruairi Keating headed wide from six yards.

The contest was effectively settled in the 89th minute as an error from Paul Sinnott allowed substitute Clarke to fire unerringly past Horgan at his near post.

Paul Murphy scored twice as Wexford Youths deservedly got their first Premier Division win to lift themselves off the foot of the table.

Following an inspection, Cork referee Anthony Buttimer deemed the rain-sodden pitch playable, insisting it was good underfoot, and the game would go ahead.

But the conditions scarcely mattered as Bray started at a blistering pace, creating three chances inside the opening two minutes.

Andrew Lewis had a shot deflected for a corner before Alan McNally then brought a fine save from Graham Doyle from Ryan Brennan’s delivery, all inside a hectic opening minute.

An immediate Curtis Murphy’s corner from the other side left McNally holding his head in his hands as Doyle somehow pushed his header over the bar from point-blank range.

Youths quickly settled, though, and took the lead on 19 minutes.

Craig McCabe’s long throw came back out to him. The right-back skipped past a defender with the ball holding up on the wet surface before he crossed.

Murphy arrived to get a firm header to the ball with it flying into the net with the help of a deflection off Bray skipper Conor Kenna.

Gary Delaney flicked it on with Peter Cherrie forced into a fine reaction save with his feet from Danny Furlong’s low drive.

Though well in the game, Bray were left cursing Doyle again on 36 minutes as the keeper got down smartly to push another McNally shot round a post from Murphy’s corner.

Bray’s Hugh Douglas then saw his header from another Murphy corner cleared off the line by Danny Ledwith in first half stoppage time.

Youths were much the better side after the break, but didn’t work Cherrie until the 61st minute when the Bray keeper held a low drive from Aidan Friel.

Cherrie was there again five minutes later to smother a shot from Murphy after the big striker turned McNally to get in his shot.