Limerick overturn Bray in the battle of the basement boys 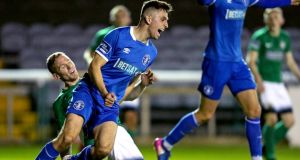 Connor Ellis wheels away after his goal against Bray Wanderers. Photograph: Laszlo Geczo/Inpho

Bray passed up their last real chance to go out with a bang rather than whimper this season as they came up well short against Limerick, the team they were hoping to overhaul in order to avoid automatic relegation.

Notionally, they can still do it after losing by two goals here but in reality it is no more than a mathematical possibility and, barring a little miracle of their own, Tommy Barrett’s Limerick can safely start to focus on the play-off games that will decide their fate in more than a month’s time.

Barrett made five changes for a game his side primarily needed not to lose and though a couple might have made a positive impact, the visitors were made to look better than they are for long stretches by hosts who did little to help themselves.

By half-time the game was all but over with poor defending leading to goals turned in from close range by Barry Maguire and Conor Ellis.

By the end, Wanderers were all but down with a reshuffle by Gary Cronin during the break not enough to improve his side’s fortunes. Bray made too many fundamental errors in possession and passed up the couple of chances they created. The introduction of John Sullivan, meanwhile, only served to highlight how much they missed him these past few months.

Limerick will take heart from the victory although whatever first division side they eventually face will surely make them work harder than they had to here.

The only consolation for Wanderers is a new found sense of stability about the place that will serve well as they look to rebuild next season.