Europa League: Rovers on the ropes as RoPS win in Tallaght 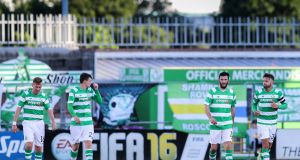 Shamrock Rovers’ Europa League hopes are all but over as no mid-season joy was visited on Tallaght Stadium from Lapland.

RoPS’ Jarkko Lahdenmaki and Janne Saksela scored in each half as the poor attendance of 1,908 made their feelings known after the second goal went in and at the final whistle.

Rovers now face a mammoth task in trying to overturn the tie when they travel to Rovaniemi in northern Finland next week.

A promising start by Rovers saw Gavin Brennan’s diagonal run end with his shot being deflected out for a corner inside the opening minute.

RoPS were then opened up on the right on 10 minutes with Patrick Cregg putting Simon Madden away to cross. Killian Brennan had fouled a defender as he jumped for the header and the chance was lost.

Despite shading possession, Rovers were dealt a major blow in the context of the tie when they conceded a shocking goal on 26 minutes.

It initially stemmed from right-back Madden’s over-hit back header not being kept in by Craig Hyland to gift RoPS their first corner of the game.

And though Saksela’s delivery was headed away by Rovers’ skipper Stephen McPhail, Robert Taylor picked up the loose ball to drill a shot into the area that was deflected to the net off the body of Lahdenmaki to give the Finns an away goal.

Rovers struggled to create much in the final third as they pressed to get back into the game before the interval, failing miserably to force a save from visiting keeper Antonio Reguero.

Killian Brennan did have an opportunity to work the Spaniard on 40 minutes, after he’d won a free kick from Mamut Saine. His deadball effort beat the wall but was wide of Reguero’s right-hand post.

As in the first half, Rovers started the second on the front foot with Gavin Brennan again the one coming close four minutes in when shooting over the top from just inside the area.

Fenlon brought on Dean Clarke for Gavin Brennan 11 minutes in and it almost worked the oracle within a minute, the striker finally working Reguero with a crisp drive the keeper parried away at the butt of his left-hand post.

It proved a false dawn as, for all Rovers’ endeavour, RoPS broke for their second goal on 74 minutes.

Excellent work on the left from substitute Aleksandr Kokko saw him ghost past two Hoops defender to set up Saksela to finish with a well-place side foot shot from 16 yards.

Rovers tried to respond with Brandon Miele doing well to make space and fire in a shot that Reguero did well to touch onto his crossbar.

1 Diego Maradona dies of heart attack, aged 60
2 Keith Duggan: Through the glories and the disgraces, we were all Maradona addicts
3 Darragh Ó Sé: Cork and Donegal went out with the wrong attitude
4 Gordon D'Arcy: I know what Joe and Cheika would do. Fix the basics
5 Handful of God: Five magic Maradona moments
Real news has value SUBSCRIBE