Under the new plan, Bohemians and Shelbourne would share the redeveloped ground 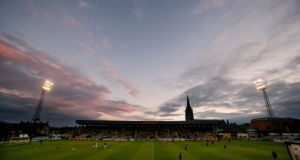 Dalymount Park: long regarded as the spiritual home of domestic football in the Republic of Ireland.

The amount owed, which is the result of a loan taken out when it was anticipated that the ground would be sold to the developer Liam Carroll in a deal valued at more than €60 million, is somewhat larger and further negotiations may still take place.

But the difference between the two sides is not believed to be hugely significant and Zurich has indicated that it will make a decision after this week.

The current proposal is being funded by Dublin City Council which would take control of the stadium’s freehold as part of a plan that would involve Shelbourne sharing the ground, something that has previously been floated as a possibility on a number of occasions.

DCC would then take control of the Drumcondra ground which, it is expected, would be used for residential development.

Several obstacles remain to be resolved with the clubs, both of which had hoped to be able to deal with other creditors as part of any overall deal. But DCC is understood to be reluctant to pay out additional sums in order to settle debts which it believes are matters for the respective boards.

In Bohemians’ case, a number of members have a prior lien on Dalymount as a result of money they loaned to the club and talks are believed to be continuing in the hope of resolving the situation with, again, significant progress believed to have been made.

Although Shelbourne’s board have not been central to the process so far, the club is very much a key part of the plan and it seems entirely possible that they could be playing out of Phibsboro by the beginning of the 2016 season if DCC is anxious to press ahead with the redevelopment of Tolka.

That may yet meet with the resistance of some fans with the independent supporters’ group, the 1895 Trust, having only just announced their intentional to ballot members on their preferences regarding the club’s future ownership structures and home.

The current board, however, which is led by chairman Joe Casey, has indicated it is open to the move as long as they feel the deal in question is right for Shelbourne.

In reality, both clubs’ general financial position leaves them in a desperately weak negotiating position.

The association wants to lease the ground from the council but it is understood the council’s preference is to retain control of what would be a municipal stadium which would have not just an artificial pitch but also facilities for other sports and could be used for concerts.

Tallaght Stadium, which is owned by South Dublin County Council, has yet to be used for a concert but it has a fire safety certificate for crowds of up to 26,000 for such events, something that could potentially generate significant outside revenue.

With no substantial amount of money allocated for redevelopment ahead of the deal’s conclusion, it remains to be seen just how ambitious the council plan might be but the FAI has pledged to support the deal and the Government would be likely to weigh in behind it.

Allowing for the time it will take to get all the agreements required in place as well as the planning and subsequent building work itself, 2020 may end up being the date set as a target for the completion of the project.